A Brief History of Buchenwald

Weimar had long been a Nazi stronghold and scene of many fervent pro-Hitler rallies. What better place to build a model concentration camp. Situated on the Ettersburg hill, Nazis chose the colder northern slope for prisoner barracks. The prisoner barracks occupied a sort of terraced area, strategically situated so high guard towers would have an unobstructed view of the prisoner area.

The SS garrison occupied a central position; sixteen sturdy, 3-story buildings to house one company each (which I presume is anywhere from 100 – 250 soldiers) were built in a sort of semi-circle arrangement in front of a parade ground, above the prisoner barracks area. The facility included casinos, a troop hospital, shooting ranges, drilling grounds, garages, a sawmill, pig farm, two petrol stations, a falcon yard and a zoo for officers’ enjoyment. However after visiting Buchenwald, the concept of ‘zoo’ took on a creepy new meaning – it was intentionally situated perhaps 10 steps from the electric prisoner fence and roll call area, in full view of the crematorium smokestack, so that prisoners would see how well-fed the animals were in comparison to their starvation portions. 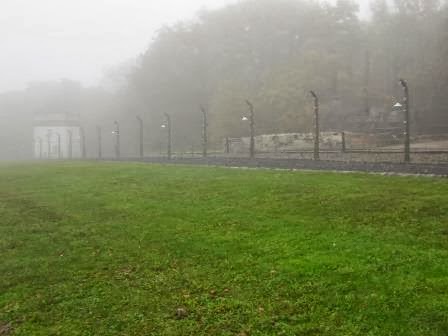 SS members of high position moved their families and children into one of two sets of housing developments, one reserved for officers. There were 48 recorded SS marriage ceremonies and 12 births that took place on grounds.**  By the end of 1937 there were 1,617 SS stationed at Buchenwald. The original regiment, the SS ‘Thüringen’ trained at Buchenwald, as Buchenwald was used as a training ground for guards sent ot other camps. There were regular indoctrination sessions on hating Jews and dealing with other ‘vermin’ of society – wives were to participate.  Shortly before the invasion of Poland the Thüringen regiment  joined the Wehrmacht (German armed forces) and helped in the invasion of Poland, spreading their trained version of brutality.
In contrast to the remote and hidden Auschwitz in Poland, Buchenwald was in Germany, and though isolated on a hill, the townspeople for the most part were complicit and fully knowledgeable there was a ‘preventive custody’ camp outside their town. Until the SS barracks were built, SS were stationed in town. Prisoners arrived at the Weimar train station only to be marched up the hill; until a crematorium was built on-site in 1940, bodies were sent into town to be cremated there. Additionally prisoner work crews routinely worked in town. Just as in Auschwitz, a prisoner was especially fortunate to speak German.
There was no gas chamber; the method for extermination was slave labor and inhumane conditions, especially in the limestone quarry. There were other sinister methods of killing devised at Buchenwald not used elsewhere; those will be explained in later posts.
When I visited Buchenwald it was a cold, rainy day. That is perhaps the most appropriate weather to visit a concentration camp, rather than a bright, sunny day. No matter how many photos one may see of a place, visual is but one sense. They will never communicate smell, temperature (e.g. freezing temperatures), touch (damp/wet), and sound.

Photo taken at Buchenwald October 2013. In the photo above, look for a short wall just the other side of the electric fence. This was the site of the bear enclosure and zoo where SS and guards brought their families for entertainment and picnics, mere steps from the fence and in direct site of the guard tower and crematorium smokestack.

** Until recently I didn’t understand the concept of an SS marriage ceremony.  Because to be a Nazi you had to formally relinquish any church membership,  Heinrich Himmler issued an “Engagement and Marriage Decree” that gave him sole authority for certifying marriages of SS men.  He demanded extensive documentation on marriage applications of both the future husband and wife of Aryan ancestry, ideological loyalty, physical fitness, acceptable racial features and fertility. At the end of the SS ceremony, couples were presented with a fancy, marital edition of Mein Kampf which was to occupy a place of honor in the future household.

In Germany some 240,000 SS brides were accepted into the SS society, and schooled to produce babies, obey their husbands, hate Jews and be heartless with enemies of the Reich. In 1939 the total population of German women numbered almost 40 million; a full third, or 13 million women were actively engaged in a Nazi Party organization. So, yes – I guess SS wives really would not be bothered picnicking within view of a prison camp.

There is a new fascinating book I just started entitled Hitler’s Furies: German Women in the Nazi Killing Fields, by Wendy Lower, published late 2013.  It’s the first to explore the female side of participation in the Nazi belief system and war machine, especially in the lower levels of young secretaries, nurses and teachers. The author is a history professor in Germany who based her research on original documents – some of the best information was gleaned from the SS marriage applications – which included photos of both applicants.