Book Review - One Star Away by Imogene Salva 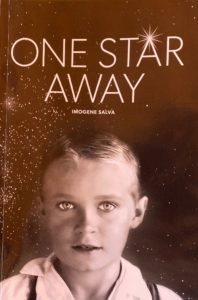 One Star Away by Imogene Salva is a beautifully written coming-of-age story of a Polish family forcibly deported by Russians to Siberia in 1940. Then, the reader is transported to India, where hundreds of Polish refugee children spent four years under the protection of the Maharaja of Nawanagar. This true story mirrors hundreds of thousands of other Polish families evicted by the Russians.

The author frames the story through the eyes of eight-year-old Ziuta, one of six siblings, who in real life is the author’s mother. This real-life trek moved from one difficulty to another with the pacing and tension of a great historical novel.

The book begins with a modern-day encounter with the exiled Shah of Iran. As a child, Ziuta traveled through Iran to to safety in Balachadi, Nawanagar State, India. There, the kindly Maharaja of Nawanagar, or “Bapu” welcomed up to a thousand Polish children as extended family. He served as a fatherly-like protector for over four years and built a school and home for the Polish exiles. Imogene Salva’s writing shines as she highlights another aspect of Poles during World War II that has received scant attention. This heartfelt and personal book deserves a wide audience.

Most people are familiar with the Jewish Holocaust and the German side of World War II. Yet, those topics only tell half the story of occupied Poland during World War II. Russia invaded Poland on September 17, 1939, two weeks after Germany did. In the winter of 1940, Russian soldiers forcibly evicted 1.7 million civilian Poles from their homes and sent them to harsh labor camps in the frozen northern lands of Russia. Only a third survived, most dying from starvation, disease, and poor conditions. After Germany invaded Russia in Operation Barbarossa in June 1941, many Poles either escaped or were released. More Poles died walking or traveling with few resources or food for thousands of miles south to safety.

The diaspora of Polish refugee children during World War II, many orphaned by parents who did not survive the cruel conditions imposed by the Russians, spread to many countries who welcomed them. They ended up in Iran, India, Palestine, New Zealand, and British Africa, as well as in Mexico. (See previous post on Colonia Santa Rosa – a Polish refuge in Mexico.)

One Star Away represents thousands of Polish children

I spoke with Imogene Salva, and was touched by a poignant comment. In school if she talked about her mother’s story, she heard “that never happened.” Or worse, she was accused of lying. Where many people knew about the Holocaust, few people outside the Polish community knew about the Soviet occupation and impact during World War II. Salva’s mother always remembered her four years in India as good years. While some awareness of Polish history is growing, especially thanks to the internet, the plight of Polish refugee children remains a quiet part of history few books and texts cover.

In a sweet coda to Salva’s story, the author attended a reunion of the Maharaja’s Polish children in Jamnagar, India with her mother in 2018. There her mother, Ziuta, visited the daughters of the Maharaja of Nawanagar. She found a final peace in her ‘second homeland’ as life came full circle. Salva writes at the end of the book, “the survivors clung to each other as they expressed their eternal gratitude to the ex-ruler of Nawanagar State for creating ‘a little Poland in India.’” Upon returning home from India, her mother in a final peace, passed away three days later.

The book is a definite recommend and is appropriate for ages middle-school and older.

For other books touching on the Polish experience during World War II under Russian occupation, see these previous posts.

My Sister’s Mother: A Memoir of War, Exile, and Stalin’s Siberia by Donna Urbikas