Miep Gies, the woman who hid Anne Frank, died six years ago, on January 11, 2010, at the age of 100. Gies, along with her husband and three others, hid eight Jews from the Nazis for over two years, in a Secret Annex at Prinsengracht 263 in Amsterdam. She never turned her back on her friend and employer, Otto Frank and his family, including his daughter Anne Frank. In Gies’ writings, she always described the eight people in hiding as “our friends.”  Names like Miep Gies, Corrie Ten Boom, Henry Slawik, Irena Sendler, and so many others who risked their lives at great personal risk, share a special place in heaven. 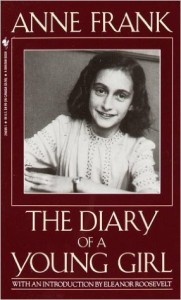 The Diary of Anne Frank/The Diary of a Young Girl, first published in 1947 is a classic of modern literature. According to the Anne Frank center in Amsterdam, “Since it was first published in 1947, Anne Frank’s diary has become one of the most powerful memoirs of the Holocaust. Its message of courage and hope in the face of adversity has reached millions. The diary has been translated into 67 languages with over 30 million copies sold.”

Miep Gies penned her memories at age 78; I remember reading her story, though I’m not sure if it was this exact book or not. The outside perspective completes the broader perspective of what it meant to honor your conscience and friendships, regardless of personal risk. Anne Frank Remembered: The Story of the Woman Who Helped to Hide the Frank Family, written by Miep Gies and Alison Leslie Gold, was first published in 1987; the most recent version available on Amazon carries a 2009 publication date. The 1988 television drama, The Attic: The Hiding of Anne Frank, featured Mary Steenburgen as Gies.

Under Dutch law, the copyright for a work normally expires seventy years after an author’s death. Up through December 2015, the Anne Frank foundation filed suit in Dutch court asserting Otto Frank as co-author. Such a move would have extended the copyright, and the book’s subsequent royalties to the foundation. However the Dutch court ruled against the foundation, denying Otto Frank as co-author, and placing the work in public domain for research purposes. Copyright laws vary by country. As the issue is still in contention as of January 2016, issues may change after posting of this blog.

Regardless of copyright, Anne Frank’s contribution to Holocaust literature and history remains timeless. No one can argue that without Miep Gies’ help, her family would never have lived for two more years, and we would not have a poignant diary of young girl..

In the Words of Miep Gies

“There is nothing special about me. I have never wanted special attention. I was only willing to do what was asked of me and what seemed necessary at the time.” Quoted from her prologue to Anne Frank Remembered: The Story of the Woman Who Helped to Hide the Frank Family.