The End of Auschwitz

March 2, 2014
Katrina Shawver
The end of Auschwitz came soon after the German administration headquartered in Krakow fled on January 17, 1945. The city of Krakow fell to the Soviets two days later.  Ironically, the same day the Soviets reached Krakow, 56,000 remaining prisoners in Auschwitz were marched westwards, many dying on the road.
At Auschwitz, the Germans began reducing the population in late 1944 sending about 65,000 west to concentration camps in Germany, like Buchenwald, Dachau and Ravensbrück. The only prisoners left behind were those too close to dying to be able to walk far. Beginning January 20, many of the SS guards in the guard towers fled, though some SS remained behind.  Trying to hide evidence of their crimes, the Germans blew up the crematoria and on January 23.  The Germans plundered one of the Canado commando sheds before setting fire to it. The Germans tried to hide evidence by blowing up the crematoria and gas chambers. 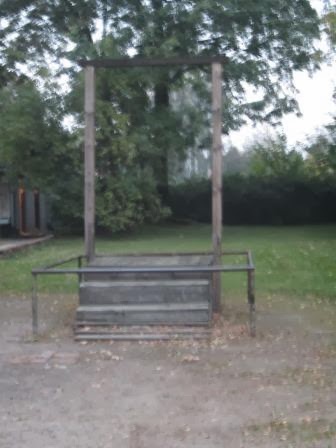 On January 27, the Soviets advanced and liberated Auschwitz.  There they found only 7,600 survivors.  A Polish military film crew documented the horrendous sights, including a stack of 600 prisoners’ bodies who had been shot by the retreating SS.  In an ironic twist of history, Stalin’s soldiers, liberated Poland from Nazi’s.
Two years later the Polish tribunal used this evidence to try and convict Rudolf Höss and forty SS from the camp.  On April 16, 1947 Höss, the founder and first commandant of Auschwitz, was hung at a gallows specially constructed facing the camp to the front, and in full view of his villa to his left.
Photos taken October 2013.  The first is of the gallow – still there today.  The second view – past the car and over a wall is the top half of the  Höss villa.  The photo was taken standing in front of the gallows so it’s the same view he would have had. Today it is private property. 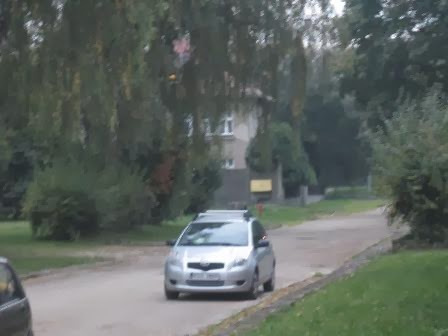