In the US, we honor our military veterans on November 11. The date is celebrated in many other countries as Armistice, or Remembrance Day. In Poland it is Polish Independence Day. Discussion of veterans reminds me of one of the most appalling snubs of the 20th century. Polish military veterans who fought as part of British forces during World War II were excluded from Victory Day celebrations for sixty years.

Polish military fought alongside the British during World War II

After Germany invaded Poland on September 1, 1939, some members of the Polish military, including the Air Force, escaped the German occupation. These men and women went to France, determined to fight Germany and reclaim a free Poland. Their motto? “We do not beg for freedom. We fight for freedom.” When France capitulated, they left for Britain and presented themselves as ready to fight. There, they battled British elitism and a strong prejudice against Poles. 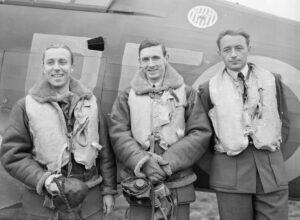 Members of the 303 Polish Squadron – Battle of Britain. Wikimedia Commons

Polish pilots reported to the British Royal Air Force as available and willing to fight. Though there was a dire shortage of trained RAF pilots, British attitudes towards them were largely cold and dismissive. The 303 Squadron was formed in July 1940 as an agreement between the Polish government-in-exile and the United Kingdom. Polish pilots in the 303, and one other Polish squadron made a key difference in helping to win the Battle of Britain. The Polish pilots downed 126 enemy (Germany) aircraft during the Battle of Britain. (See previous post on the Kosciuszko Squadron.)

Polish troops and the 1944 Battle for Monte Cassino, Italy

Seventeen days after Germany invaded Poland, Russia invaded from the East. Following the Soviet occupation of eastern Poland in 1939, the Russians arrested and deported some 1.5 million Polish citizens to Soviet labor camps and prisons. This included more than 240,000 Polish soldiers. (In a gross oversimplification due to limited space here,) in 1941, the Soviets released Poles, who trudged on a deadly march south to join the Allies under Britain. One unit of soldiers, deployed to Italy, the Polish II Corps numbered 45,000 men who fought and died alongside the Allies. Monte Cassino is the best-remembered, but certainly not the only place Polish troops fought. Surely they would be appreciated?

Bitter Betrayal at Yalta, and British betrayal in 1946

In February 1945 Winston Churchill, Franklin Roosevelt, and Jozef Stalin met to discuss many issues, including the disposition of Poland. All three agreed that after the war, Poland would be under Soviet control. They never consulted with or informed the Polish government-in-exile. Polish troops fought to the bitter end of the war, planning to return to a newly independent, non-communist Poland. They lost to communism.

So think about this. During the war, more than 200,000 members of the Polish Armed Forces fought with the British High Command. When Britain planned celebrations and a victory parade in June 1946, more than seventeen countries were invited. Yet, in deference to Stalin, Poland was not included. A few Polish pilots were invited, but they refused when the rest of Polish military were excluded.

The insult grows. After the war, many Poles chose to stay in the UK, rather than return to a communist Poland. Today, more than 800,000 people of Polish nationality live in the UK. Polish is the second-most spoken language in England. I have found few references in the teaching of World War II, or in English-language texts that mention the contributions of the Polish pilots and military. Recognition and inclusion of Polish veterans in the UK did not occur for sixty years, until 2005.

One movie I do recommend is Mission of Honor, available on both Netflix and Amazon Prime. It came out in 2018. Trailer below. It is the story of the Polish pilots flying with the British RAF. It’s a drama, not a documentary.