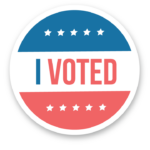 Vote? Me? Yes you! My right to vote, and yours, is based on countless people who fought, campaigned, and even died, for decades.

I grew up in a household that paid attention to news and current events. My bachelor’s degree is in political science. I vote in every election and hope I have passed this tradition down to my children. When my children turned eighteen, I encouraged them to serve as a poll worker on an election day. Two did and the main insight from that day remains with them: Few people showed up to vote. It was a very long, boring day. What about today, now, 2020?

Overshadowed by the constant and upsetting statistics of COVID cases and incessant political ads, is the centennial of women’s right to vote in the United States. The 19th amendment to the US Constitution was signed into law one hundred years ago on August 26, 1920, granting women the right to vote. Across the Atlantic Ocean, Polish women earned the right to vote two years earlier on November 28, 1918. There, too, women’s right to vote and participate in government came after decades of campaigning by many.

In any country, the right to vote – women, people of color, immigrants – is one of the most important rights, and requirements, of living in a democracy. It took eight long years of a Revolutionary War (1775-1783) to gain independence from the British King George III and gain a voice in government. At first voting was reserved for White men who owned property, or roughly six percent of the population. We have come a long way, one voting right at a time.

As recently as 1971, the minimum voting age was twenty-one. Today it is age eighteen.

Answer this question from the test for US citizenship: What is the most important right granted to US citizens? Answer – the right to vote.

Your Vote is Your Voice and your Privilege

If you choose, forget, or simply don’t vote, think about this: You just made my vote, and your neighbor’s vote, count double, triple, ten, one hundred or even a thousand times more than your opinion. Opinions don’t count. Only votes do.

So here’s my pitch: Don’t waste this hard-earned right or take it for granted. Ever. Know that Every. Vote. Counts.  It really does. Go ahead. Speak loudly and vote.

For questions on voting or where to vote: USA.gov – Voting on Election Day

National Park Service, Women’s History: 19th Amendment. This website has a ton of information, resources, and kids’ activities on voting, including the 15th amendment that granted the right to African-American men to vote in 1870.

Poland.pl: One Hundred Years of Women’s Right to Vote in Poland.