Passover greetings to my Jewish friends and may you have a blessed Seder feast. The Jewish Passover celebrates the time God brought the Jews out of slavery in Egypt, as described in the book of Exodus in the Torah and the Christian Old Testament. The theme of release from slavery and the pursuit of freedom remains universal, poignant, and more timely than ever.

Freedom is within our grasp, and Pesach (Passover) reminds us that we need to reach. – Rabbi Bradley Shavit Artson

During WWII, the Germans chose the Eve of Passover to begin the Liquidation of the Warsaw Ghetto. 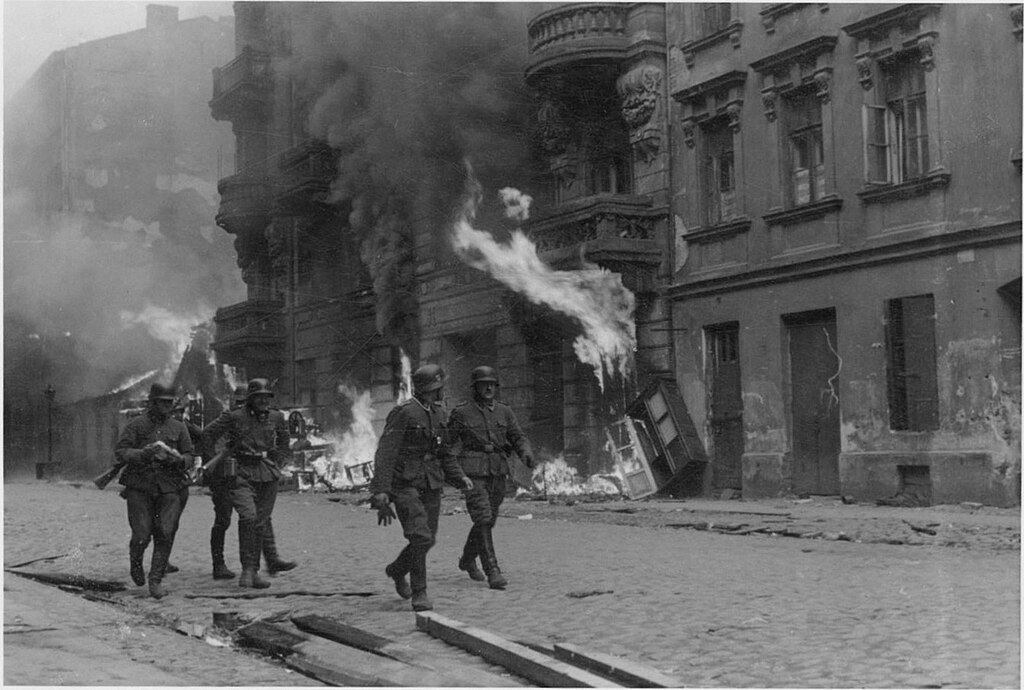 Public Domain, from the Stroop Report. Jurgen Stroop was the SS General in charge of the Warsaw Ghetto.

On April 19, 1943, the Jewish fight for freedom rang out from Warsaw, not Egypt. The Germans planned to begin liquidating the Warsaw Ghetto, a day before Adolf Hitler’s birthday on April 20. However, they found the ghetto quiet and vacant; all Jews went into hiding. Armed with pistols, homemade grenades, a few weapons, and Molotov cocktails, about 750 members of the Jewish resistance fought back against over 2,000 German troops.

Though the Germans retreated in surprise, losing twelve men, they quickly regrouped. Three days later they began destroying the ghetto building by building, burning each one to flush out those in hiding. While the Warsaw Ghetto Uprising failed to overthrow the Germans and lasted less than a month, the action marked the first urban uprising against the Germans, and symbolically inspired others. I understand the logic that – if you know you will probably die anyway – then die fighting and resisting. A handful of individuals remained after the main action and continued to attack the Germans, hiding in the crumbling remains of the once vibrant, and now nearly vacant city.

The ritual feast of the Seder dinner commemorates Passover

The Seder feast includes reading, drinking wine, telling stories, eating special foods, and singing. It is held on the first night of Passover. Perusing the Internet I located some very imaginative variations on the dinner to appeal to different tastes. There is the Lego Seder Plate, the imaginative book The (unofficial) Hogwarts Haggadah, matzoh ball soup earrings, and nail decals for each of the ten Biblical plagues. I confess I have never attended a Seder dinner. But I did read that it is required to drink four cups of wine, so I am open to invitations. Chag Sameach. Happy Holiday.

Wishing my Jewish friends All the Joys of the Passover Holiday.

Enjoy this new Passover video that subtly references many freedoms.

3 thoughts on “Passover greetings to my Jewish friends. Chag Sameach!”