Happy New Year 2017.  Do you set resolutions, or review past accomplishments? Or both? I gave up on resolutions several years ago. Why? It became depressing and somewhat self-defeating that not a single one lasted all year. I already know rush hour at the gym begins January 1 and fades by Valentine’s Day. The “I’ll work out/do yoga/write every day/be grateful/choose your goal” becomes “OK, three times a week is still good,” to “Well, you know, life just happens.” Still, a year has 365 days to start something new. To cross something, anything, off the bucket list. To add something to the dreams list. Looking back at 2016, here’s what I crossed off. Look out 2017, here I come. 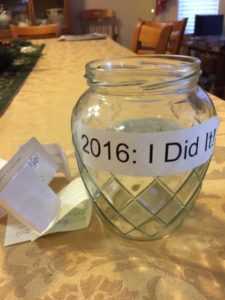 From my “I Did It” jar for 2016, I pulled out the following (that I remembered to write down):

In March, I won an area speech evaluation contest for Toastmasters.

Also in March, one of my blog posts on shewrites.com ranked as one of the top three blogs. Twice.

In April, I sponsored two more children through Compassion International: Damie and Deraretu, two nineteen-year-old women in Ethiopia, in addition to Emebet, also in Ethiopia, and Sandip in India. (I’ve never publicly announced my sponsorships, begun ten years ago. I believe giving is a private affair, but you’ll understand a goal in 2017.)

In September I bicycled across the Golden Gate Bridge and rode another 19 miles to the ferry. 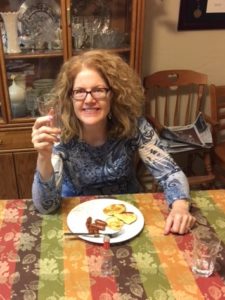 My check-in rate at the gym varied from four times a month, to ten times a month. Not great, but I’ll include a few hikes and other activities in the mix. (The phone app for my gym tracks when you check in.)

As of November 28, I finally have a finished, edited manuscript for my book, that I will begin marketing in January 2017. It’s a milestone – success is when I see it in print. Regardless, I raised a true vodka toast to Henry and me. Na Zdrowie!

Find an agent and publisher for Henry’s story. Thanks for all good thoughts, referrals and karma you can send my way. Thanks too for my several Polish friends who have helped with research and translations (and a lovely Polish heritage ball.) In the works is a book trailer, more blogs and extending my social media.

Incredibly, I just signed up for a Sponsor trip to Ethiopia to meet Damie, Deraretu and Emebet in April. It seems surreal. That’s what happens when you watch CNN Heroes for an evening – I’m reminded that life’s real priorities are far more grounded in others.

I’m more motivated than ever to stay healthy, which includes getting to the gym even more. To age well and keep stiff joints at bay, you have to move. Two months ago a close relative became unexpectedly, and severely ill. Her travel and camping days are now in the past. The husbands of three good friends had mini-strokes. A girlfriend my age had a hip replacement (she’s had two knees replaced already.) Another had back surgery. Wow. Life is short. Or long. But more than ever I am cognizant of the main takeaway of knowing Henry Zguda – life is uncertain. Enjoy every day. Or at least don’t give up when the bad days happen, for life is indeed cyclical, like the stock market. Or an EKG. Choose your analogy. Historically both always go back up after the lows.

Happy New Year 2017. Wishing you abundant blessings. Write down the good stuff. You’ll surprise yourself at what you did in a year.