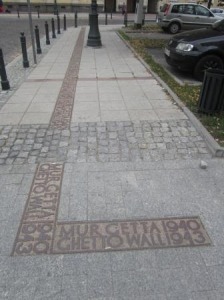 The Warsaw Ghetto Uprising began April 19, 1943. This noble ‘last stand’ by desperate Jews against the Germans became the first urban uprising in German-occupied Europe. Symbolically it stands as the most important Jewish uprising. It lasted less than a month and nearly all who participated lost their lives, but it inspired other uprisings at Sobibor and Treblinka and changed the story of millions walking in resignation to their death without a fight.

Would You Fight? Could I have the Courage to Fight? Do we really know? 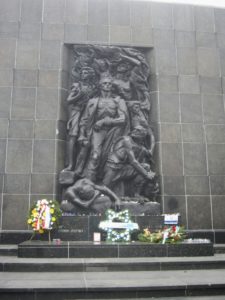 We have to ask ourselves, if you watched nearly 300,000 people herded off, never to be seen again, at what point do you rebel, if you know with near certainty you will die anyway? Do you take a stand? Fight? Give up? Believe you are actually being sent to a work camp, and not frighten your children by acting distressed? I’d like to think I would have fought, but after two and a half years in such a place, would I have had the strength? Does any of us really know what we are capable until placed in equally trying times?

The Germans invaded Poland on September 1, 1939, and immediately imposed the harsh and eventually lethal conditions towards Polish Jews that German Jews had endured since 1933. The Warsaw Ghetto was built in 1940; it isolated the capital city’s Jews and tightened the noose already around them. In November 1940, nearly 300,000 Jews, or thirty percent of Warsaw’s population were forcibly squeezed into a crowded area that occupied less than three percent of the geographic area of Warsaw. Eventually, 80,000 succumbed to disease, hunger, and miserable conditions within the Ghetto.

The Germans “liquidated” 300,000 Jews in less than three months

In a massive operation conducted between July 22,1942 and September 12,1942, the Germans deported 6,000 Jews a day, or an approximate total of 300,000 doomed people, to the Treblinka extermination camp. The sheer number of people is staggering: imagine a crowded football stadium of 58,000 forced into crowded, stifling cattle cars and sent to their deaths in just over nine days. The Germans tried to assure those remaining in the Ghetto that the detainees were only being sent to work camps for resettlement. When word reached the ghetto that deportation mean certain death, an underground resistance movement formed. They began to acquire a small cache of weapons with help from the Polish military underground

On April 19, 1943, Germans entered the Ghetto to  ‘liquidate’ the remaining Jews

In January 1943, the Germans entered the Ghetto again; this time, they were met with resistance and withdrew. Those left began to build shelters and underground bunkers in anticipation of a German order to fully ‘liquidate’ the ghetto. On April 19, 1943, a date that coincided with the eve of Passover, and Hitler’s April 20 birthday, the Germans entered the Ghetto, anticipating a mere three days for the operation. Instead, Jewish resistance held the Germans at bay for nearly a month, until May 16, and inflicted casualties against the Germans. Following the action, the Germans immediately plundered anything of value and shipped it back to Germany, then bombed and flattened any remaining portions of the Ghetto.

Sources: ushmm.org, Embassy of the Republic of Poland; personal notes from touring Warsaw in 2013.  Photos were taken by the author in October 2013.