The Warsaw Ghetto Uprising and the Warsaw Uprising

The Warsaw Ghetto Uprising, and the Warsaw Uprising share two key similarities. First, separately, both Jews and Poles chose to valiantly put their lives on the line and stand against the German occupation of Warsaw. Secondly, both uprisings ended in mass murder of almost all participants by the Germans and near total destruction of Warsaw. 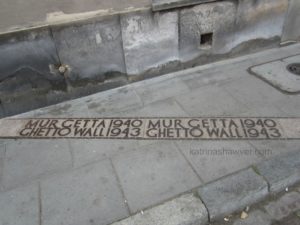 The Warsaw Ghetto was established in 1940. Mass deportations began in 1942
Germans eventually forced 400,000 Jews to live in a cramped 1.3 square miles. In July 1942 the Germans began mass deportations from the ghetto to the Treblinka concentration camp where almost all perished. Word reached those remaining in the ghetto that deportation meant certain death.

Jewish Resistance organizations formed in July 1942
In response, on July 28, 1942, several Jewish underground organizations created an armed, underground resistance. They began acquiring weapons, with some help from the Polish military underground, the Armia Krajowa or AK. On April 19, 1943, on the eve of Passover, and in honor of Hitler’s April 20 birthday, the Germans had planned to liquidate the remaining 42,000 Jews in the ghetto in three days. Jewish resistance held the Germans at bay for nearly a month before being killed or deported to Treblinka. Hitler then flattened the entire ghetto portion of Warsaw. The Warsaw Ghetto Uprising became a huge symbolic victory, the most important Jewish uprising, and the first urban uprising in German-occupied Europe. 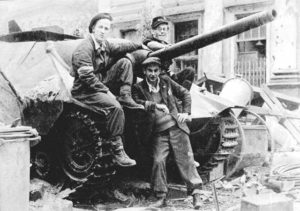 The Warsaw Uprising Began August 1, 1944
Polish citizens and a smaller group of Polish army resistance remained in occupied Warsaw. The many stories of resistance, primarily by citizens, could comprise volumes. Perhaps the best portrayal in film is the 2014 Polish film Warsaw Uprising. When fighting began in Warsaw, as Germans won back one part of the city at a time, Polish fighters and citizens began to suffer from famine, lack of communication lines and water; many took to the sewers to move around the town unseen. The rebellion lasted until October 1. Poles held out hope the Soviets would help fight against the Germans; instead Soviets waited for total destruction and then moved in to claim the city.

Once the Uprising was squelched, Germans looted the empty city, filling 33,000 rail cars with stolen furniture, personal belongings and factory equipment to be sent back to Germany. Hitler then flattened most of what remained of Warsaw. Over 200,000 Poles lost their lives in the Uprising. After the fall of Warsaw only 1,000 people remained in the city, likely all in hiding. The city was almost completely uninhabitable.

The Warsaw Uprising Museum Offers a Treasure Trove of Insight and History
The Warsaw Uprising Museum opened in 2004, the same year that Henry Zguda died. There’s a surprisingly huge collection of weapons, bombs and guns from both sides as well as a suspended bomber airplane. Insurgent Poles often buried their arms to hide them. Today, as more buildings are excavated and renovated, caches of old Uprising weapons are still being found. I consider the museum a must-see if you ever visit Warsaw.

Top photo attribution:  “Stroop Report – Warsaw Ghetto Uprising 09” by Unknown (Franz Konrad confessed to taking some of the photographs, the rest was probably taken by photographers from Propaganda Kompanie nr 689.[6][7]) . (Public domain under wikimedia.org.) Jürgen Stroop is best known for being the general in charge of liquidating the Warsaw Ghetto and writing the Stroop Report, a book-length report on the operation to Heinrich Himmler. After the war he was tried, convicted, and hanged for crimes against humanity. This is one of the most famous photos of the Warsaw Ghetto Uprising.

The second photo was taken in October 2013 when I visited Warsaw. Today the outlines of the former ghetto walls are memorialized as a permanent reminder.

Third photo was taken by Polish resistance fighters. It is in the public domain.