The Warsaw Uprising Movie - A Film Like no Other 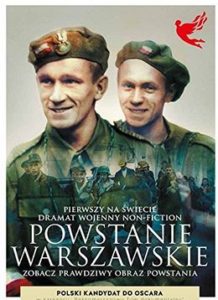 The Warsaw Uprising movie jolts the viewer into the historical reality of a significant historical event. I’ve never seen another film like it; nor is there any equivalent film. The entire film consists of restored footage shot by the propaganda department of the Polish Home Army (underground) in 1944 during the uprising. The film represents a massive amount of human labor to colorize and reconstruct the film frame by frame.

By August 1944 Poland has been occupied for nearly five years
By August 1944 Poland had endured nearly five years of German occupation in the east, and nearly five years of occupation by Stalin’s forces to the east. Warsaw fell under the control of Germany and had already suffered several bombing waves by the German Luftwaffe that destroyed entire neighborhoods. After the Warsaw Ghetto Uprising in April 1943 and final liquidation of the Warsaw Ghetto, few Jews remained in the city. But over 200,000 Polish citizens of the city remained, trying to eke out a normal existence.

The Home Army decided to stage a final rebellion to the Nazis, in hopes of reclaiming their city before the Russians invaded. By the end over 17,000 members of the Home Army, and 200,000 civilians would die in the uprising. The Home Army employed a propaganda and information arm to film the uprising. The purpose of filming was to show citizens that the city continued to function and life continued. However as the revolt wore on, the film crew began to realize they were documenting a tragic outcome, and to guard the film at all times.

Two years and thousands of hours went into this film
The producer of this film realized that for modern audiences, color is far more real and powerful. When I first watched the film, since it was in color I did not fully understand that I was watching real people, not actors. The creation of the film was incredibly labor intensive. In addition to the hours spent colorizing each frame, over 10,000 hours were devoted to frame by frame reconstruction. The footage used in the 90-minute film was culled from six hours, and over 1440 hours were spent colorizing each frame.

The original reels were shot in black-and-white photography and on silent. The only adjustments to the modern version were to add color and sound, including a scripted, imaginary banter between the film crew.

Warsaw Uprising will air on public television in Germany on August 2
The film is expected to shock German audiences, and will be followed by a documentary. Most Germans are not schooled in the Polish experience. Norbert Himmler, Director of programming for ZDF public broadcasting hopes to provoke a discussion on why German-Polish relations were so difficult, and in many ways still are.

I am blessed that a Polish friend entrusted his copy of the DVD with me to watch. Thank you RS. I debated ordering my own copy online – but I couldn’t translate the order page.

Note – I find it ironic that the Director of Programming who chose to air this film for German audiences carries the last name of Himmler. However, during a quick Internet search I cannot locate a family connection.