April 29 - 70 years since the Liberation of Dachau 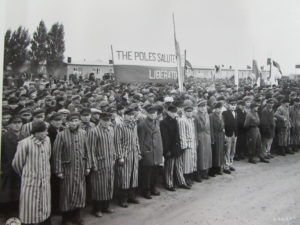 April 29, 2015 marks 70 years since the liberation of Dachau concentration camp, when American troops reached the camp. Henry Zguda was liberated at Dachau following a two week death march from Buchenwald. After nearly three years in German custody, he was so weak, malnourished and ill with typhus his friends carried him to a bunk after he laid down in the gutter for a sip of water. Below is the experience in his words:

A March from One Hell to Another Hell
There were about seven days of marching to Dachau (from Flossenburg). Regensburg was a nice town near the river. Narrow streets, old town. But as we walked through the town the people there screamed at us “Raus, Banditen. You bandits get out of Germany!” Only one lady opened the window and threw bread to us. She was afraid to be nice I think. Just think, only one person in the whole town was nice to us. Even boys age 14 or 15, like Hitler youth yelled at us and threw rocks at us as we went through the town.

My souvenir from Regensburg was illness. Everybody was getting sick. We were all sick with edema and swollen legs from hunger and diarrhea. It was bloody diarrhea like with the typhoid. If it wasn’t typhoid then it was something like that. It stunk like hell.

On April 27, 1945 we arrived at Dachau which was full of other Czech prisoners ready to march to the mountains. By now there were maybe only 100 prisoners left behind me, out of the 1,000 we started with. It was a rainy day and I remember being very exhausted and ill. I fell down and crawled to the street gutter to get some water. The stronger friends took me and others to the barracks and left me in the corner to die.  I remember it was very cold and the window was broken.  Somehow I found an old blanket and fell to sleep.

At this point I don’t care where I have been or where I am. I was very sick. One sip of water and I go to the bathroom. I was completely dehydrated.

I remember we arrived on April 27. On April 28 I’m on the block. On April 29 they moved me to another block. I could not eat; I gave my soup to someone else. I didn’t go to the hospital because I know from Auschwitz and Buchenwald they kill you in the hospital. 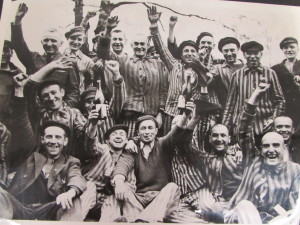 April 29 – Freedom Arrives
On April 29, I’m on the 3rd floor of the barracks. The block was closest to the camp fences and guard towers. That’s when I see the SS going down from the tower with their hands up. I called to my friends – “Look! Look!” And I saw American helmets in the distance. There was no shooting, no nothing. The camp commandant was ordered to shoot us all, but he didn’t want to take the responsibility, even though he had ordered the camp be destroyed. And I see the SS standing there, the Czechs, Americans, speaking, ‘everything is all right, you’re free, you’re free.

About 80 prisoners jumped on him.  In three minutes they flattened him like a pancake, like less than 10 inches. I didn’t jump on him but I was there and I saw it. He died under the wooden shoes of prisoners. That was the only revenge we got.  – Henry Zguda

Photos are courtesy of the National Archives. Note – I’ve intentionally chosen pictures of survivors and omitted the unspeakable horrors also found by American troops. At liberation, one third of the prisoners were Jewish, two-thirds were political prisoners, including many Poles. I’ve actually held both original photos in my white-gloved hands.

And . . for FF . . here’s a special hug for you and your father who was also liberated at Dachau and is still alive to witness.