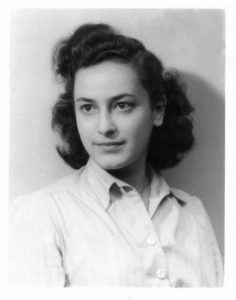 Hélène Berr is being hailed as the Anne Frank of France. The publication of her journal in 2008 revealed a sensitive, insightful 21 year old woman documenting her plight as a Parisian Jew in 1942. The Journal of Hélène Berr quickly became a bestseller in Europe. An English translation was published in 2009 with far less fanfare. I will be attending an exhibit on her life that opened recently in Scottsdale, Arizona. Who was this person, I asked myself, and why had I never heard of her until three weeks ago?

Who was Hélène Berr?
She was a brilliant graduate student in English literature at the Sorbonne, from a well-to-do family and had close ties to Parisian society. Rather than leave France, her family had been working with the French Resistance and secretly helping Jewish children escape or get fostered. Beginning in 1942 she kept a journal, sending pages home with her cook in case something happened to her. In March 1944 the Gestapo arrested her and her parents on her 23rd birthday and deported them to Auschwitz. She was later sent on a death march to Bergen-Belsen. She survived the march, only to be beaten to death five days before the camp was liberated.

What is the Mémorial de la Shoah of Paris France, owner of her journal?
The Shoah Memorial did not open until 2005, although the roots of the organization began years earlier. I watched a short video on the Memorial’s web site, and I remain impressed. For one, they are not a “Holocaust only” institution. Their exhibitions and teaching focus equally on the three main genocides of the 20th century: the “Victims of Nazism”; the Armenian genocide and the Tutsi genocide in Rwanda. Their primary focus for the Nazism portion is of course the Jews of France.

Hélène’s journal stayed hidden for 50 years. It was not published until 2008.
She left instructions that if something happened to her, the journal should be given to her fiance, who had managed to escape through work with the Underground and survive the war. The pages eventually reached him, and he subsequently kept them hidden for 50 years. In 1992 a niece of Hélène’s went in search of the manuscript and located them in 1994. After the journal was transcribed, the originals were donated to the Shoah Memorial in Paris.