Five Things to Remember About Auschwitz-Birkenau

, January 27, 2015, is International Holocaust Remembrance Day. My friend Henry Zguda survived nearly a year in Auschwitz. A friend saved his life by getting him a job in the kitchen. He wore the red triangle of a political prisoner, with a “P” in the middle for “Polen/Polish.” Here are five things to remember about Auschwitz-Birkenau.

Auschwitz is in Oświęcim Poland.
Auschwitz is located in southwestern Poland, 30 miles outside of Krakow. However when it was established, it existed as part of the German General Government, so camps were never “Polish.” The Auschwitz-Birkenau State Museum is operated by the government of Poland, an 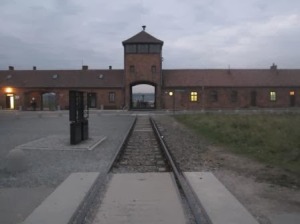 d does its best to honor all victims. Germans built the camps and were the killers. Poles were victims, and are custodians of the memory. Auschwitz was a German concentration camp in German occupied territory. It is a gross error – and insult to Poles – to refer to any concentration camp as “Polish.” (See Petition on German Concentration Camps)

“Auschwitz” was not a single place or site.
Auschwitz was primarily Auschwitz I, II and III (Monowitz factory). Only I and II remain. There were also over 40 sub camps used for slave labor. The famous Arbeit Macht Frei gate is over the original camp entrance, a Polish army camp the Germans converted for their use. The recognizable large entrance arching over a train track is the entrance to Birkenau – Auschwitz-II, opened in 1942. It’s a two and a half mile drive from Auschwitz I, and is massive in land area. Imagine countless horse barracks that collectively held 100,000 people at one time. Then keep walking. 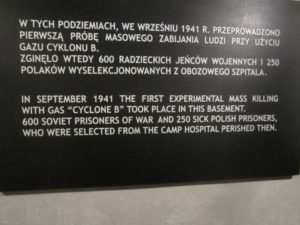 The first prisoners were mostly Poles.
Most of those first arrested and sent to Auschwitz were Poles. 150,000 Poles, primarily political prisoners including clergy, were starved, tortured and murdered there. Poles and Soviet POWs were used to test the gas chambers – all perished. Look up Father Maximillian Kolbe. .

After 1942 Auschwitz became the largest “killing center” for European Jews, but there were hundreds more on a smaller scale.
Its central European location, remote/hidden location, and access to rail lines and water made it ideal. The large gas chambers and crematoriums soon ran non-stop. It’s generally agreed that about 1.1 – 1.3 million people perished at Auschwitz, ninety percent Jewish. The murder committed there is a crime against all persons who were there and still hard to grasp for its industrialized methods. There were more than 2,000 other German concentration camps throughout occupied Europe. All were brutal, some notorious, but none reached the death count of Auschwitz. Even the Germans referred to it as “Anus Mundi”

When is the best time to visit a concentration camp?
While most people would answer “Never”, I submit something entirely different.  Everyone should visit once. The best time to visit is in bad weather, when it’s cold, rainy or snowy, and dark. Poland is COLD in the winter and remember you have warm shoes. Go alone if possible so you can hear the silence. And if you feel, as I did, the crowd of souls who still cry out that they, and these places, never be forgotten, share the story with the next generations.

Top photo courtesy of Auschwitz-Birkenau State Museum. The middle and bottom photos were taken in October 2013. It was 7:30 p.m., growing dark and very cold. The only three people there were my husband, myself and our private tour guide. We had stayed past closing.