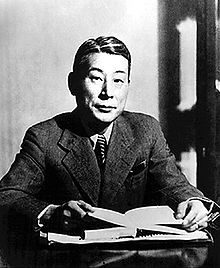 Chiune Sugihara is one more example of someone who saved thousands of Jews, at risk to himself and his family. Every time I hear of someone new, I have to ask myself: Could I risk every family member’s life to save strangers? I’m not sure.

At a time when it was hard for desperate Jews to get out of occupied Poland, Sugihara, Japan’s deputy counsel in Lithuania, issued more than 6,000 exit visas to Polish-Lithuanian Jewish refugees, allowing them entry to Japan. He did so against the orders of his superiors. Japan was about to sign an alliance with Nazi Germany. Some are now calling him the Japanese “Schindler.”

He later served as Japan’s diplomat to Romania from 1942-1944. When the Soviet troops marched into Romania, he and his family were taken prisoner and served 18 months there before being released and sent back to Japan.

I’d never heard of Sugihara until I caught a recent news clip that a joint Japanese and Polish film is under production in Wroclaw. Whether it makes it to the United States with English sub-titles remains to be seen.

Many of the refugees settled in Kobe Japan or in Japanese-held Shanghai, in current China. Per Wikipedia there was a large Russian Jewish community in Kobe, and a large Jewish community in the Shanghai Ghetto. It’s estimated that most of the 20,000 Jews in Shanghai survived the war.

He is counted as Righteous Among the Nations.