Lasciate ogni speranza voi che entrate. I like this saying much better than Arbeit Macht Frei. This is what really should have been over the entrance to Auschwitz.  – Henry Zguda.   (Abandon all Hope, Ye who Enter Here. Sign at the entrance to hell in Dante’s Inferno.)


Henry spent his time in ‘Auschwitz I’, the original camp that housed primarily Poles and Germans more than Jews.  However in January 1942, a month after the United States entered the war following the attack on Pearl Harbor, a conference of high ranking Germans convened at a lakeside villa in Berlin. The purpose of the Wannsee Conference, named after the location of the villa, was to coordinate full implementation of the ‘Final Solution.’  The resulting plan called for eradicating some 11 million Jews in Europe, with specific estimates by country. The estimate of Jews in occupied Poland was 2,284,000; the only country higher was all of Russia. The final report in essence sanctioned and organized the industrialization of death and came up with a coordinated plan. 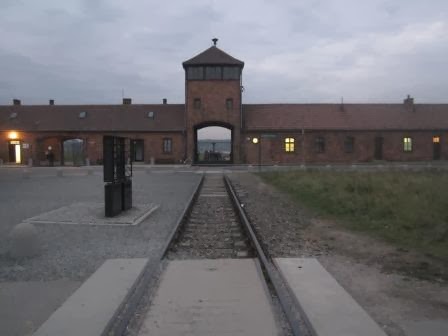 Auschwitz II – Birkenau opened in March 1942, to house 125,000 ‘prisoners of war.’  ‘The construction of a complex of four gigantic gas chambers and crematoria began in mid-1942. The Germans estimated that 1.6 million people a year could be killed and burned there.
July 17, 1942 SS Chief Heinrich Himmler inspected Auschwitz – Henry remembered being lined up at roll call when he came to camp, but had few comments. His only words were:  (Looking in a book.) There’s Himmler, that son-of-a-gun. I saw him personally you know. He visited Auschwitz, and we had to wash, and stand at attention very still, and he just walked like this (Henry imitates strutting at attention, expressionless.) They were so clean you know, the Germans. He was so shiny, so clean. But here, we people, can do nothing to clean.  We can only stand there. We suffering like crazy. (Henry arrived mid-June so was on his way to being a musselman at that point.)
On July 19, 1942,  Himmler ordered the ‘resettlement’, a euphemism for extermination of ‘the entire Jewish population of the General Government by the end of the year (e.g. all of Poland.)  Krakow was the capital of the General Government under Hans Frank, and the closest Polish city to Auschwitz. Today Auschwitz is a 30-minute drive from Krakow.
Later in 1942 – Auschwitz was to become the killing center of Europe, and especially for Poland’s Jews. If you think of simple geography and practicality, Auschwitz was near major rail lines, isolated, centrally located in Europe, and in Poland where the Germans had already targeted over 2 million people. More Jews died at Auschwitz than any other camp. In this case the term ‘Auschwitz’ includes the original camp, Birkenau was later renamed to Auschwitz II, where the huge gas chambers and crematoriums were located, and the other sub-camps (equally deadly due to poor work and living conditions) were collectively known as Auschwitz III.
In an upcoming post – Henry watches an incoming trainload of Jews while delivering bread to Birkenau.
As I type these words, the sheer enormity of scale of planned industrialized murder is simply beyond comprehension.  Intellectually I know it happened; I’ve walked Birkenau on a cold, dark, empty dusk.  Isn’t seeing believing? And still . . . . how does one cope in the face of that hate that an entire category of (civilian) humans should be eradicated as ‘vermin’? I think it’s easier to comprehend as history because it already happened. But I think I almost understand those doubters of news reports of the real scale of organized murder, or those Jews who refused to believe where they were being sent. What rational person could really believe it? Surely the reports must be exaggerated, right?  I think as an American who hasn’t lived in Europe it’s even harder – we’ve never been a conquered people. And how do you teach a younger generation that this was not a video game?
Photo taken October 2013 at dusk directly outside the main entrance to Auschwitz II – Birkenau. Until I visited I hadn’t understood the different pictures I’d seen. The gate of Arbeit Macht Frei is at the original Auschwitz I, which was modified from an existing Polish army camp. The Germans designed and built Birkenau for their needs after evicting local Poles and claiming large tracts of land. This (train) entrance to Birkenau was designed and built specifically to process incoming trainloads of Jews by the thousands – Hell awaited inside. Birkenau is a two or three kilometer drive from Auschwitz I. In Henry’s time it would have been vacant, isolated land between the two camps. Today the area is built up between the two facilities.
Sources:  Notes from visit to Oskar Schindler’s Factory Museum; Auschwitz-Birkenau State Museum; The Holocaust Chronicle.