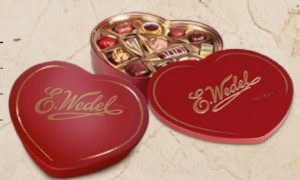 How about a chocolate vacation? If someone organizes it, I’m all in. Think of it. Travel to top European countries, and sample the best chocolate each country has to offer. In Poland, that would be E. Wedel chocolate, the oldest and most famous chocolate in Poland. I confess I missed the Wedel chocolate lounges (they’re called lounges, not restaurants) in both Warsaw and Krakow. But I did manage to scoop up several boxes of Wedel chocolates at the airport prior to leaving Poland. They were some of the best souvenirs I brought back.

The First Wedel Shop Opened in 1851 in Warsaw

Karol Wedel, of Berlin, opened his first confectionery in Warsaw in 1851, offering drinking chocolates and a few other items like cough caramels and peppermint lozenges. The company grew, and in 1865, son Emil Wedel took over the business. Soon, counterfeiters were issuing copies of the popular chocolates. He announced that every chocolate would bear his hand-written signature. That signature remains the recognizable logo.

E. Wedel chocolate remained a progressive company, prior to WWII

The company expanded; grandson Jan Wedel took over in 1923, and again in 1931 expanded the factory. The socially progressive Wedel began to employ women, and offered a range of generous benefits, from free dentistry and pre-school for employees to regular vacations. He made preparations for World War II, and the factory continued to operate, even though Wedel was ordered to manufacture chocolate for the Germans. He secretly organized meals for the locals.

After Warsaw fell, The Russian Army Stole Everything Left, and and in 1949 the communists nationalized the company.

Once Warsaw fell, the Germans arrested Jan Wedel. The Russians then stole everything left in the factory and business. In 1946 the communists nationalized the company and that was the end of the Wedel family involvement. In 1991, Pepsi bought Wedel for a short-lived ownership. After several corporate changes, it’s currently owned by LOTTE, a South Korean conglomerate. I prefer to just think of it as good Polish chocolate, regardless of who owns it.

Did I mention that any vacation involving chocolate must include Merlot?

And, just for fun,