"Auschwitz had a wonderful orchestra" 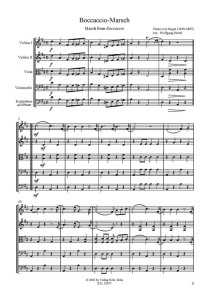 “Auschwitz had a wonderful orchestra.” With that line, Henry Zguda introduced me to a lesser known component of all German concentration camps – music. For some lucky prisoners, musical ability saved their lives, because they were selected for the camp orchestra. Henry worked for the director of the Auschwitz orchestra, so was able to describe it in first-hand detail.

Capo Franz Nierychło was the Director of the camp orchestra

“Capo Franz Nierychło was the Capo of the kitchen and he was the Kapellmeister (director) of the Lagerkapelle or camp orchestra. Go figure. He was a real son of a bitch. He claimed to have been born in Germany, and he obeyed the Germans to the letter. He was a postman before the war, and led the postal orchestra in Łódź Poland. So when he came to Auschwitz the Germans let him organize the orchestra and he picked his guys to play. There were many famous names from all over Europe, Jewish and otherwise.”

Germans first found the instruments, then matched a prisoner to it

Where did the instruments come from? I didn’t think people brought their instruments to Auschwitz? 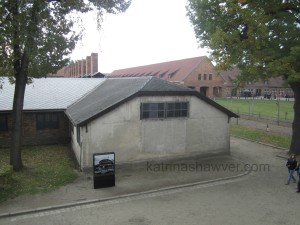 “No, no, no. The Germans bought the instruments. The Germans would buy a trombone. Then they looked till they found a trombone player. And so on till they filled the orchestra. Capo Nierychlo would sit with his boys right there just inside the main gates to the camp. The orchestra played lively music like marches as the work crews left for the day. It was supposed to give you energy to work. [Henry gives a very sarcastic smirk.]

I specifically remember the Boccaccio operetta – it was a very lively piece. In the evening the orchestra would assemble again and play as prisoners returned to camp from working all day. These poor guys would come back to camp, dragging shovels and bodies of prisoners who died that day. When the last dead guy had been carried in, the SS guard would give a sign, and Capo Nierychło stopped the orchestra on whatever note they were on. If you played one note extra he’d hit you in the head or kick you.

Capo Nierychło was no good. But he was nice to me because I am friends with Kazio Szeleste.”

Photo taken October 2013 from second story administrative office looking down near the main entrance to Auschwitz. The blank wall is the end of the kitchen, and the site where the camp orchestra played every morning and evening, as exhausted prisoners trudged by. Capo Nierychło had only to step outside the kitchen to lead his orchestra. The term “capo” was a camp term used for prisoner in charge of a group of men.

If interested, I located two memoirs that specifically corroborate several of Henry’s stories. Music of Another World, by Szymon Laks, is the author’s experience as the (Jewish) Kapellmeister in Birkenau. Eventually published in 1979, the English translation was published in 1989. I also located a little known memoir by Polish prisoner 25539 Kazimierz Tyminski, To Calm My Dreams. In January 1943 the SS were looking for a piano player for the SS dining hall. After playing Chopin’s Polonaise in A Major on a perfectly tuned black Bechstein piano, Tyminski earned a job entertaining the SS, and thus survived by his musical ability. These are the only two memoirs I’ve found by an Auschwitz musician. If someone knows of another, please contact me.