Reports of a Hidden Nazi Train Mean Gold for Poland. 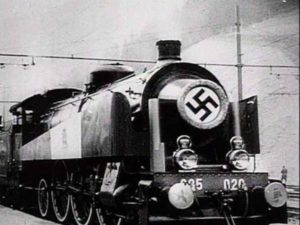 Reports of a hidden Nazi train possibly carrying gold and valuables, hidden in a mountain tunnel in southwest Poland have set off a world-wide frenzy of curiosity. The Polish government just confirmed there is a train and they know where it is. The Russians, the World Jewish Congress, and two treasure hunters who claim ten percent for the find, are already fighting for what they consider their rightful share. However under Polish law the find belongs to the state of Poland.

Could it be Russia’s Amber Room?

Russians hope the train contains the stolen “Amber Room” given to Tsar Peter the Great from the King of Prussia and completed in 1770. Thought to be worth over $250 million, the Nazis dismantled the room in 1941 and it hasn’t been seen since. As background, for centuries amber has been the national gemstone of Poland, and is considered a semi-precious stone many tourists buy as a must-have souvenir. It is the fossilized resin of the Cretaceous and Paleocene trees. It generally has a transparent shimmer to it when held to the light. Today Baltic amber is in high demand and short supply. Click for a Fascinating story by a UK publication.

There are Two Clear Winners Already: Poland and Polish Tourism in Southwestern Poland. 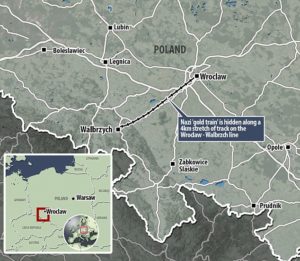 Despite multiple claims to the potential treasure cache, anything recovered will belong to the republic of Poland, and will likely still pale in value compared to the amount of stolen Polish art and treasures that remains unrecovered or unreturned. Call it spoils of war if you like, but the laws of Poland apply and possession, is well, a hundred per cent in this case, assuming Polish authorities can adequately secure the site. Stolen art and other national treasures from both Germany and Russia remains a sore subject for all three countries – each has claims on the other. Today Poland’s Division of Looted Art has an inventory of over 63,000 documented works of looted art that remain unrecovered. Don’t expect Russia’s Putin to return a dime to Poland; but I fully expect he’ll demand full return of anything clearly identified as Russian.

Tourism in southwestern Poland has already increased as the press and curious travel to Wałbrzych. According to Radio Poland, the museum at the city’s Książ Castle is already trying to cash in on tourism. It is organizing tours that explore the legacy of Project Riese, a Nazi operation that saw the construction of extensive underground chambers in the vicinity of the Lower Silesian town. I’m sure tee shirts will be for sale shortly.

Two Recent Stories Demonstrate the Legal Complexities of Recovered Nazi Loot
Two recent stories demonstrate a modern fact – the legalities of property rights are highly complex for any works of art acquired during the Nazi period. In 2012 German customs officers discovered art worth approximately $1.35 billion hidden away in the Munich apartment of the elderly Cornelius Gurlitt, the son of Nazi-era art dealer Hildebrand Gurlitt. Proving ownership and provenance 70 years after a theft poses huge challenges. He died in 2014 and ownership continues to be disputed. The 2015 film Woman in Gold highlighted a Jewish woman’s lengthy and difficult battle with the Austrian government to reclaim a Gustav Klimt painting that had clearly been in her family.

If you haven’t seen the 2014 film Monuments Men, based on the book of the same title, I recommend it for a similar issue of stolen art hidden by Nazis underground, and then recovered.

Photos – top photo has been used in multiple news reports; the map is courtesy of zerohedge.com, and the amber ear rings are ones I bought in Poland. My daughter has the matching pendant.