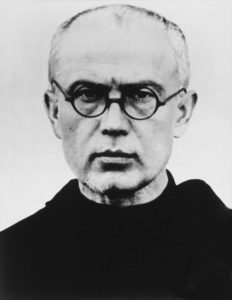 A film about the Polish Saint Maximilian Kolbe (1894 – 1941) is in final production by a Mexican film and production company. The company plans to premier the film next summer at the 2016 Catholic World Youth Day in Krakow. On July 31, 1941 the humble Catholic priest volunteered to take another man’s place who was sentenced to die by starvation.  Pope John Paul II canonized Father Kolbe as a martyr of charity on October 10, 1982.

“The most deadly poison of our time is indifference.” – Kolbe

Father Kolbe sheltered 2,000 Jews before being arrested by the Germans
After the outbreak of World War II and invasion of Poland, Father Maximilian Kolbe sheltered refugees including 2,000 Jews whom he hid from Nazi persecution in his friary. Germans arrested him on February 17, 1941 and imprisoned him first in the notorious Pawiak Prison in Warsaw. They then transferred him to Auschwitz on May 28, 1941. He became Prisoner #16670. 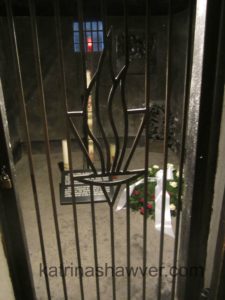 Father Kolbe Changed Places with Another Man Sentenced to Die
In late July 1941 three prisoners disappeared from camp. In reprisal, the deputy camp commander picked out ten men to starve to death as a deterrent to future escapes. When one man cried out “My wife! My children!” Father Kolbe took the man’s place. All ten men were stripped naked and thrown together to starve in a dark bunker in the basement of Block 11. Every day Father Kolbe held Mass and sang hymns and held the men up in prayer. After two weeks he was the last man alive. The Germans entered, gave him an injection and he died.

A Mexican Film Company is Producing a film to be Previewed at World Youth Day
I’m intrigued by Dos Corazones film and production company. On their web site they identify themselves as “A film production and distribution company, Dedicated to Messages of Faith and Inspiration.”  It may be that the films are distributed through Catholic channels, primarily in Mexico, but now that I know about their films I’m interested. Here’s the link to the film company.  Dos Corazones film and production company 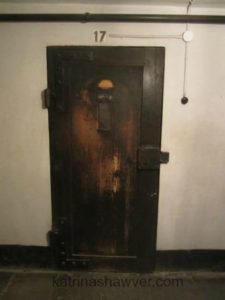 If you visit Auschwitz today, Father Kolbe’s cell is memorialized, and elsewhere on the grounds there is a statue of him. The cell, as shown in the second photo, is gated now so visitors can view the cell.

The third photo shows the cell door across the hall, which is what the door to Father Kolbe’s cell would have been during the war. The sign inside the cell reads as follows (Polish first, English second)

“Cell in which in 1941 died prisoners sentenced to death by starvation as a result of collective responsibility for escapes. One of them was Father Maximilian Kolbe, the Polish priest who sacrificed his life to save another.”

Source: catholic.org; americancatholic.org;
Photo of Father Kolbe courtesy of Wilipedia Commons. Photos of prison cell were taken by author in October 2013.
Note – emails to the film company to verify the information went unanswered. The story first appeared on Radio Poland.

Epilogue: The man Father Kolbe saved was Franciszek Gajowniczek (1901 – 1995.) He survived the war, as did his wife, however his sons were killed in a Soviet bombardment of German occupied Poland in 1945. He spent over 50 years telling people about the heroic act that saved his life. Pope John Paul II invited him as a guest to the canonization ceremony of Father Kolbe in 1982.