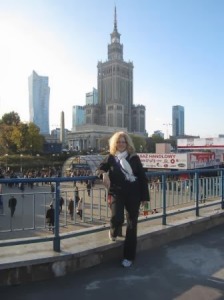 A visitor’s Warsaw experience now includes a kitschy new museum that relives communism. It opened recently to capture another slice of tourist curiosity. An article in today’s Arizona Republic travel section featured it. I almost laughed out loud and choked on my coffee. Ironically today’s Real Estate section highlighted new homes focused on “mid-century modern.” Apparently, the 1950’s and 1960’s are the hot new retro period.

Apartments were small, simple and government-owned
The museum features a phone booth, with no phone inside, “just as it sometimes was in communist times.” The tour company offers tours in old communist vans. Based on the photos of a “communist-era sitting room” the rooms were small, furnishings were simple and utilitarian. I’ll keep my house and car, thank you very much.

Communism – Where some were “more equal” than others
In theory everyone was “equal” under communism.  Henry’s version of communism was that there were always those who were “more equal” and no Pole was ever equal to a Russian. Communism may be past tense in Poland, but when I showed Henry’s communist ID to our Polish tour guide he quietly froze and instantly became more formal. I then explained Henry’s pragmatic way of attaining employment under a system he disagreed with, and his refusal to join the communist party. Piotr, our guide, was okay after that. In a second instance, one of my Polish translators in Phoenix politely never returned my calls or emails after learning of Henry’s “official” government connection. Trust me, communism was no laughing matter for those who lived through it. 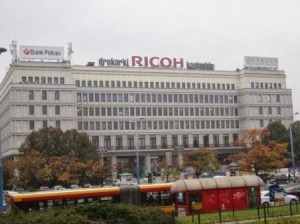 Capitalism in the old Communist party headquarters
When my husband Rick and I visited Warsaw in October 2013, our bed and breakfast was across from the former communist headquarters building, now an office building for Ricoh. The building was the epitome of what I recognize as the “communist” style – square, small windows, white or grey, very symmetrical, and as opposite of beautiful Krakow as you can get. Our favorite twist on communism-turned-capitalism was the upscale car dealership on the ground floor.

Outside Krakow you can tour 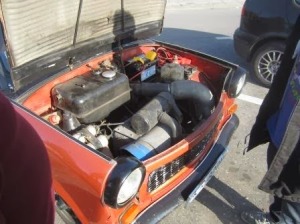 Nowa Huta, a communist planned community
Five miles outside Krakow, the communists built their idea of paradise, to showcase socialist ideals. Finished in 1959, the orderly town offered easy access to the nearby steel factory, a wide boulevard and neat, if boring houses. Today it’s a sooty suburb of Krakow, still home to about 10,000. It’s also a kitschy destination for “Crazy Guide” tours to highlight a communist era town. The laid-back college age guide literally took our lives in our hands in the old Trabant. Missing part of the floor board, the car filled with gas fumes every time he shifted. I regretted sitting in the front seat – knees crammed into the dashboard it was so small.

Photos taken in Poland. Behind me in the top photo is another legacy of communist “generosity” – Warsaw’s Palace of Culture and Science.

Note – in what I consider biased news, the Arizona Republic only posts “Arizona” travel on its web site, so I can’t include a link to this morning’s article. I understand in a way; newspapers can’t stay in business if they give away the entire paper free online. I may have to subscribe to the online version.