Scenes from a Conference 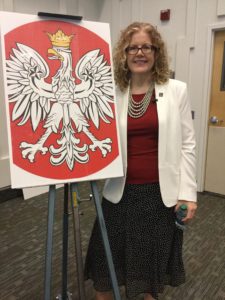 oke recently to an afternoon audience gathered at Scottsdale Community College in Arizona. The topic? Poles as Victims and Heroes under Hitler and Stalin.  It was well attended by an interested crowd. At least I didn’t see anyone visibly nodding off and there were good questions asked. Two of the biggest compliments came afterwards, from two attendees I met that day. 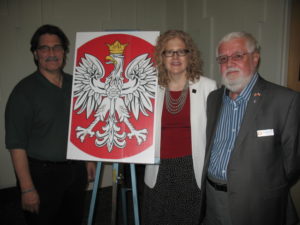 student of Poland, there’s always more I can learn, as one kind gentleman reminded me. As he soberly leaned over to tell me something, I wondered what I’d missed. He said simply that Krakow (or Cracow) is pronounced KRA-koff, not KRA-kow. Duly noted and happy dance if that’s the only error in my Polish. 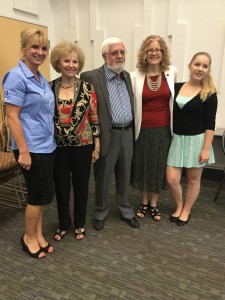 Then I received this sincere email from a daughter of a camp survivor, which meant a great deal to me:  “your entire presentation was so meaningful, comprehensive, captivating and from the heart.”

As I head off to the Arizona Polish Festival this weekend and maybe some bigos, I want to include a story my friend Henry Zguda told me once, in pure Henry logic. Every time I can pinch an inch (or so :-)) this story comes back to mind. I can still hear his voice.

You know we have a specialty in Poland I love: kasza. It’s a grain; you go to the store and buy the kasza grain, put it on to steam, and it grows big and tasty. Then you top it with real sour milk, not the buttermilk we have here. Hmmmm good.

In Poland sour milk was made from full milk. On the border of the city, when the peasants carried the milk to town, the inspector would test the milk for fat. If there was not too much fat he turned them away and wouldn’t let them sell it. Why? The fat was for the children; they needed it to grow. You know, I can’t recognize skim milk in this country; it’s like water and you pay double. In Poland if you sold skim milk you went to jail. No one there was allowed to skim the fat for themselves. Here people actually give their children skim milk.

I’ll tell you what else makes no sense to me at all in this country. You watch television and there’s all kinds 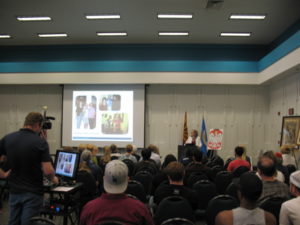 of ads for weight loss programs. I don’t understand why people pay to lose weight. Losing weight is so simple – stop eating. Then you save money. Let me tell you under communism you stand in lines forever just to get food. Why pay more money to eat less food? That makes no sense to me at all. – Henry Zguda

Thank you also to Marcia Fine for coming. Marcia’s latest book, The Blind Eye – A Sephardic Journey was selected for ONEBOOKAZ. Her book Paper Children takes place in Warsaw during WWII. 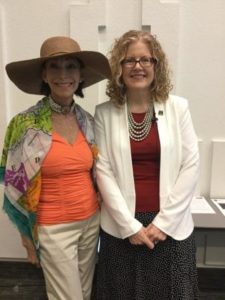