Remember the Courage of Witold Pilecki

The courage of Witold Pilecki (1901 – 1948) remains little known outside Polish circles. Everyone studying Auschwitz or the Holocaust should know this name. The Polish Army Captain snuck INTO Auschwitz after convincing his superiors he wanted to gather intelligence on the camp. Louie Zamperini meet Witold Pilecki.

In September 1940 the world did not know about the horror of  Auschwitz. The United States had not yet entered World War II, Britain and France had not, and never did send troops to Poland. The Polish Army fought valiantly from the time the country was invaded, from both Hitler and Stalin but suffered huge losses of life and equipment following the dual invasions of Hitler and Stalin. The Polish Army went underground 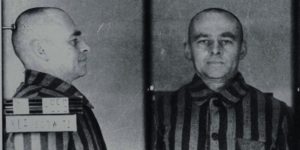 In September 1940 Pilecki sought to infiltrate the German detention camp, and send intelligence back as to what was happening there. His superiors thought he was crazy but gave him forged papers. Armed only with forged identity papers and the determination of a man on a mission, he allowed himself to be arrested in Warsaw. From this hell on earth rife with rotting corpses against buildings, he sent out the first reports on Auschwitz. The British and Americans considered his reports so fantastical that they treated them as pure exaggeration.

After enduring nearly 1000 days of sheer misery and poor conditions, Pilecki survived to escape under a dramatic rain of bullets. If only the story ended there.

Pilecki continued to work on behalf of the Polish underground after escape, and after Germany lost the war. After WWII ended, Poland fell under communist control and rule. Sadly anyone who continued to work for Poland was seen as a threat to Stalin and communism. The communists arrested and tortured Pilecki, only to execute him in 1948. Polish history and heroes were erased from textbooks, publication or any other commemoration, in favor of Stalin, Lenin and Marx. Two generations of Poles grew up knowing little of the country’s history beyond the stories handed down through families.

A strong movement is growing to bring attention to the courage of Witold Pilecki in the face of incredible odds. A Polish movie, and a growing petition seek to have his story remembered, honored and told at the United States Holocaust Memorial Museum. As we revisit stories of Auschwitz in conjunction with the 70th anniversary of the camp’s liberation, remember the courage of