The Krakow Bugle Call ("Hejnal") is Now a Phone App

In the category of odd kitsch, a piece of Krakow charm has been turned into a free phone app. Download “Play the Bugle Call” and you too can blow into your phone like a trumpet and sound the famous bugle call. It’s one of the sillier, weirder apps I’ve seen.

The famous Krakow bugle call or “Hejnal” sounded on the hour remains a mainstay of Krakow and Polish culture, as well as a tourist attraction in Old Krakow. Since the 1920’s the ritual has been broadcast every day at noon on Polish national radio. My friend Henry Zguda often accompanied his neighbor, one of the buglers, up the steep stairs of the iconic St. Mary’s church to the tall tower. The bugler opens each of four windows, for four points of the compass and sounds the famous tune. Henry always said the view of Krakow from the tower was spectacular and often hummed the tune. Few people were ever accorded the privilege of accompanying a bugler. 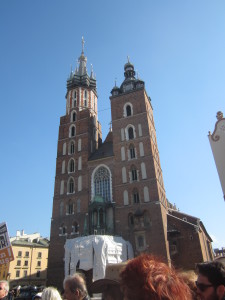 Legend of the Bugle Call
According to legend, in medieval times the bugler would sound the call in the morning and evening to signal the opening and closing of town gates, and other times as an alarm. The most feared invaders were the Tatars (Mongols.) They were known for being fast horsemen, excellent bow men and extremely cruel. They raped or killed anyone they conquered. In 1241 the dreaded Tatars were spotted nearing Krakow. The brave bugler sounded the alarm. The furious Tatars launched a rain of arrows over the city wall. One pierced the bugler’s throat mid-note. To this day the tune is played every hour on the hour from the taller tower of the iconic St. Mary’s in honor of the brave bugler/watchman who perished at his post. The tune is played every day at 12 noon on Polish radio.

Every April 2, the bugle sounds the Saint Pope John Paul II’s favorite song
The tradition has remained unchanged for centuries. The only additional song ever added to the bugle call from St. Mary’s came after 2005. In honor of the Polish pope, the Saint Pope John Paul II, the bugler plays the Pope’s favorite song, every April 2, at 9:47 pm. The chosen date and time is the anniversary of when he died and ascended into heaven.

The app may sound clever or cute, but skip it. There’s no instructions unless you read the app description before downloading. I only write about it in the spirit of “What will they think of next?” You have to actually blow pretty hard into your phone microphone to make a sound. Stop blowing, the tune stops. I could never finish it. Not worth it. Find the tune on YouTube if you can’t live without it.

The famous twin towers of St. Mary’s church are the backdrop for the twin photos in the banner of this web site and my Facebook page. The shorter tower is the bell tower; the taller tower is the watch tower. A 22-year-old Henry Zguda stands in front of the church in 1939; I stand in front of the same church in 2013. The church has anchored the Main Market Square since the 1200’s.