70th Anniversary of Liberation of Auschwitz 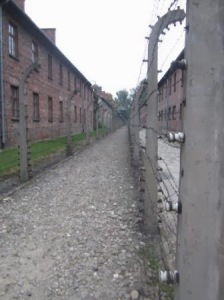 January 27, 2015 marks the 70th anniversary of liberation of Auschwitz. In 1945, Russian troops reached Auschwitz and “liberated” the camp abandoned by the fleeing Nazis. Though many world leaders and delegations will assemble in unity, Vladimir Putin has not been invited and will not attend. The omission of an invitation seems wholly justified at this time but is no reason to forget the approximately 15,000 Soviet POWs who died there.

70th Anniversary is Significant
The commemoration is significant as it’s expected to be the last “major” celebration of its kind for one simple reason. All survivors are in their late 80’s and 90’s. There are fewer survivors every year, and it’s doubtful any will be left in another ten years. The World Jewish Congress is sponsoring the travel expenses for 100 Auschwitz-Birkenau survivors to attend in person. World leaders are either attending or sending key delegations.

Thousands of Soviet POWs Died in Auschwitz
A piece of history that seems to be lost in the American telling of Auschwitz is the presence and death of thousands of Soviet POWs in the camp. In 1939 Hitler formed an alliance with Stalin. In 1941 he reneged, declared war on Russia, took few Russian prisoners and treated Soviet POWs horribly. Soviet POWs were forced to build the first barracks at Birkenau, left to sleep in the snow and mud without shelter. After the barracks were built, whoever hadn’t already died was murdered. Soviet POWs were also used in early experiments with gas chambers. To my knowledge very few Soviet POWs survived Auschwitz, but I haven’t verified that. Like it or hate it, their tragic deaths are factual history.

Now is Not the Time to Stand next to Putin
Yet, given what’s happening in the Ukraine, Poland has not extended an invitation to Vladimir Putin to attend. Poland is dealing with Ukrainian refugees are flooding their eastern border, and is well aware that if Ukraine falls to Russia, Poland could be the next target for takeover. It’s happened before. So, while Russia does have a history with Auschwitz, and Russian citizens and soldiers perished there, now is definitely not the time for the president of Poland and other Western world leaders to stand next to Vladimir Putin in anything resembling a show of solidarity. Despite strong Russian ties to Auschwitz, Putin has no respect for Poles, Poland, Jews, Ukrainians, national borders, or peace.

Presidential Delegation from the United States Announced
Two days ago President Obama announced the designation of a Presidential delegation. The Honorable Jacob J. Lew, Secretary of the Department of Treasury, will lead the ten member delegation that includes two Auschwitz-Birkenau survivors, and other representatives of the Security Council, Secretary of State.

Planning for this celebration began over a year ago. In the end, the celebration should be about honoring and remembering the sober memory of the over one million souls of many nationalities and faiths who were murdered, tortured and starved to death there.

Photo taken by author in Auschwitz I, October 2013. Political Prisoner Henry Zguda, # 39551, arrived In Auschwitz on June 16, 1942. In March 1943 he was sent to Buchenwald on a transport of 1,000 Poles. While in Auschwitz he served as a potato peeler and cook. He was forced at gunpoint to pour a shovel of salt into soup destined for Soviet POWs. See page “About Henry Zguda” for Auschwitz photo.