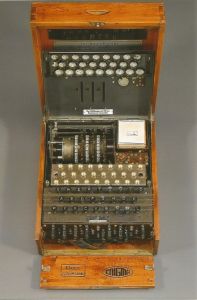 Three Polish cryptologists decoded the German Enigma machine in the 1930’s, laying the foundation for the future work by British code breakers. Given the Polish connection, I made a point of seeing the new movie The Imitation Game, starring Benedict Cumberbatch and Keira Knightly. It  opened in Phoenix theaters Friday December 12 on a limited run. The story follows the British mathematician Alan Turing, a brilliant but socially clueless man who helped break the German code at the height of WWII.

In late July 1939, Polish intelligence knew German troops were amassing on their frontier and invasion was imminent. Additionally the Germans continually made their Enigma machine more complicated. The Polish cryptologists met with French and British intelligence and initiated them on their Enigma decryption techniques, machines and code sheets. Up until then the Poles had kept their progress secret; the British and French were astonished at how much the Poles had figured out.

The highly classified and secret work done by British code breakers took place at Bletchley Park in Britain. I found a web site for Bletchley Park and have included the link below. The location is now a museum and tourist attraction teaching the unique historical contribution the British mathematicians achieved.

There have been previous movies, a television series and several documentaries made about the secret work done to decode the German Enigma machine. I had seen some talk on the internet about a previous movie that ignored the Polish connection. There is no such negativity in The Imitation Game and there were two lines that mentioned that Poles gave their Engima “mock-up” to the British. The film is a powerful and deserving tribute to Alan Turing, who essentially developed the world’s first “computer” to decode the Enigma.

Unfortunately, Turing’s life was never comical. This brilliant man was gay in an era when homosexuality was illegal in England and punishable by two years in prison or medical castration. After arrest in 1952, he chose medical castration only to commit suicide a year later. In 2013 Queen Elizabeth granted a very rare “mercy pardon” to Alan Turing.The photo (not the machine) of the Enigma machine was for sale on Ebay.