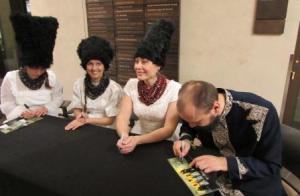 Imagine a blend of folk music, African drums, accordions and vocals blending into a rhythmic folk music. Even then the Ukrainian band Dakhabrakha performs a unique sound that defies complete description. In a last-minute impulse, I bought two tickets for the unknown band and made it a date night with hubby.

It would have been helpful if we understood Ukrainian. Without understanding the words we relied on the rhythms and sounds that were foot-tapping, and yet in a soulful, punk style.

I wish I could have gotten a picture of the four-member group surrounded by their multiple instruments, that included three large drums, but photos were strictly prohibited. When they walked on stage in long flowing white dresses and incredibly tall, black, furry hats I couldn’t help but stare at the apparition in front of us. Thick, heavy beads hung from the women’s necks, appearing as collars and covering as much skin as possible. Not Russian. Not African. Not Polish. Just, well, Dakhabrakha. The only indication they spoke or understood English was in the beginning when the leader stood and said simply “We are Dakhabrakha from free Ukraine.” 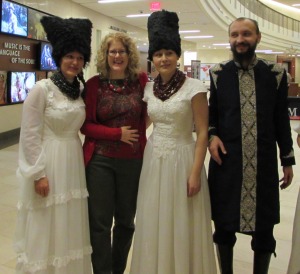 The three women and one small gentleman alternated instruments displaying broad musical talent. I’ve never seen someone pluck a mouth harp in concert. Nor have I ever seen a miniature accordion or the weird flute or whistle of some sort used in a folk song.

The music alternated between mournful and cheerful, though definitely on a mournful side, sometimes sounding like chirping birds. We definitely stayed awake. Besides the loud percussion, we just didn’t know what to expect next.

At the end of the concert, as the audience rose to a standing ovation the leader stood up, held up a Ukrainian flag and announced in heavily accented English “Thank you. Peace and Love. No War. Stop Putin.”  He received a four minute standing ovation.

I’d never been to the new Musical Instrument Museum in north Phoenix and have seen a lot of unique concerts advertised there. I was flipping through the paper a week ago and I noticed an ad for the Ukrainian band. Hmmm, well Ukraine is definitely in the international spotlight. I’m writing with a focus on Poland, Ukraine’s neighbor to the east. Why not? We made it a Friday date night with the hubby trying something different. Trust me – it was indeed different. The approx. 300 seat theater inside the museum offers some of the best acoustics I’ve ever heard. I definitely plan to go back and explore the place during museum hours.

Web site for Dakhabrakha    (look for the pictures)

Photos taken by author, one as they sign a CD I purchased. In the second photo, three members of the band graciously pose with me for a picture. It was then I found out the name Dakhabrakha means “Give and Take.”

Tags: About Katrina, Just for Fun