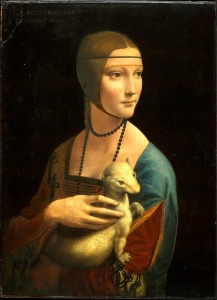 World War II robbed Poland of her freedom, intelligentsia, culture and works of art. Today Poland continues to try to reclaim Polish works of art stolen during World War II. In the last few years, several dozen works of art have been returned to Poland, primarily from Germany and the United States. However a database of stolen and missing art from WWII lists 63,000 documented works that remain unrecovered. See links below for further info.

Two of the most famous Polish works looted were the Veit Stoss altar piece from St. Mary’s and Leonardo da Vinci’s The Lady with an Ermine. Both are from Krakow and are currently on display. Both works were also mentioned in Robert M. Edsel’s wildly successful book and movie The Monuments Men, which brought the issue of stolen and subsequently recovered art to popular awareness. 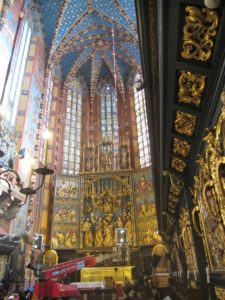 The massive Veit Stoss altar piece measures 42 feet high and 36 feet wide and consists of a central panel and two side panels. The side panels are carved on both sides so the altar must be seen open for one view, and closed for another to fully appreciate its magnificence. This masterpiece, completed in 1489, is the largest Gothic sculpture in the world. It consists of 200 fine lime wood sculptures treated with color and gold foil. Most are 12-feet high. Photos don’t do the altar piece justice. Germans dismantled it in 1941 and shipped it back to Berlin. It was recovered in the basement of Nuremberg Castle and shipped back to Poland in 1946. Ironically, Veit Stoss was a German artist.

Leonardo da Vinci’s masterpiece The Lady with an Ermine, also dating to 1489-90, was looted almost immediately after the German invasion in 1939 and sent back to Berlin. Hans Frank, the Governor of the General-Government, or German-occupied Poland, liked it so much he sent for it to be hung in his headquarters in Wawel Castle. It too was recovered shortly after the war from Frank’s home in Bavaria. Though less well known than da Vinci’s other masterpiece, the Mona Lisa,The Lady with an Ermine rivals, if not surpasses, the perfection of the Mona Lisa. 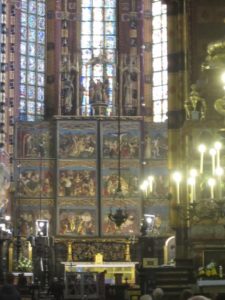 The Ministry of Culture and National Heritage maintains a web site with the list of both stolen and recovered works of art. One challenge unique to Poland in recovering her art is the time elapsed since WWII. Until Poland was free of communism in 1989 the effort could not be started in earnest. Over forty years had elapsed before Poland could begin hunting down her art. Today it’s been seventy years since the massive theft.

Art stolen by the Soviet Union during WWII remains difficult to recover.  Though the Polish government has been in negotiations for years to recover forty six pieces of art located in Russia and the Ukraine. Given the current political climate I doubt returning stolen Polish art is high on Putin’s agenda.

A conference on looted Polish art was recently held in Krakow. Experts from Poland, Germany, the United States and other European countries attended. I haven’t heard of the outcome but it seems a positive step forward for Poland to have the backing of many countries in the effort to recover her stolen art.

Photos of Veit Stoss altarpiece taken by the author in Krakow, October 2013. Photo of The Lady with an Ermine courtesy of Wikipedia. Photos were not allowed of actual painting.