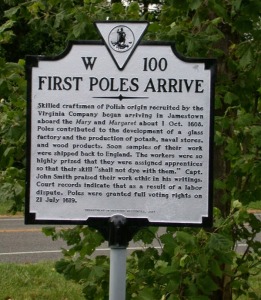 The first Poles arrived October 1,1608, years before the Pilgrims reached Plymouth. Captain John Smith invited several Polish craftsmen on the journey to colonize Jamestown, the first permanent English settlement in the Americas. They were specifically invited to establish a glass industry as a viable enterprise in the new country.

After the craftsmen built the first furnace for glass blowing, it could be considered the first ‘factory’ in the new world. The glass, pitch and tar manufactured by the Polish craftsmen were the first products exported from America to Europe.

The Jamestown Poles experienced discrimination due to their religion. They were Papists (Catholics), not of English descent and weren’t members of the Church of England. They were denied participation in the first Virginia Assembly. Only after they staged a walkout (the first labor strike in this country) were they granted voting privileges.

The first large wave of Polish immigration came over 250 years later in the late 1880’s. Ironically – due to the fact that Poland didn’t exist but was partitioned by Russia, Prussia and Austria until 1918 – many of those immigrants were registered by those countries. Had they been registered as Polish the numbers might be even higher.

Polish immigration continued after WWI due to the huge economic troubles of the young European country. The largest wave came after WWII. With Russia in control, and in fact murdering Polish patriots, thousands fled their war-ravaged country, having already endured six years of war. Again after 1980 Poles again left their country after the government implemented harsh conditions against Solidarity.

My friend Henry Zguda experienced something that many immigrants to the United States experience, regardless of their country of origin. He spoke with an accent, didn’t speak good English, and came from a country that most people he encountered knew or cared little about. Furthermore, he hailed from a communist country and arrived in 1959 in the wake of the McCarthy era communist witch hunts. (He had in fact defected from communist Poland.) He had to work harder to earn respect, especially in a country that values wealth as status. He arrived in New York City, because that’s where the Catholic Relief Society who sponsored him sent him.