April 8, 2014
Katrina Shawver
During WWII Jan Karski worked hard to convey to the world the murdering of Warsaw Jews. He authored Story of a Secret State, My Report to the World  in 1944 as a plea for Poland’s difficult reality under Nazi rule. The book was reissued in 2013 with a foreword by Madeline Albright.

Jan Karski, (1914 – 2000) was raised in the industrial city of Łódź which had a high Jewish population and he studied side by side with many Jews at university in the 1930’s.  He was handsome, well-educated, Catholic (his entire life,) skilled in languages and a patriot in his belief of Polish independence. He joined the Polish Ministry of Foreign Affairs as a diplomat in the mid-1930’s.  As an officer in the Polish army he was captured with other officers by the Soviets early in the war. He barely escaped by passing himself off as an ordinary soldier. In doing so, he missed being murdered in the Katyn Forest with his fellow Polish Army officers. (See my post of November 20, 2013 for Murder in the Katyn Forest.)

Gifted with memory and languages, he became an emissary for the Polish resistance to the exiled Polish government in London and elsewhere. On a trip back from France, he and his guide were captured by the Gestapo and Karski was tortured. Rather than break and give up valuable information, he slit his wrists and woke up in a hospital bed. The local resistance helped save him, but Karski had to jump naked out a window where they caught him and spirited him away. 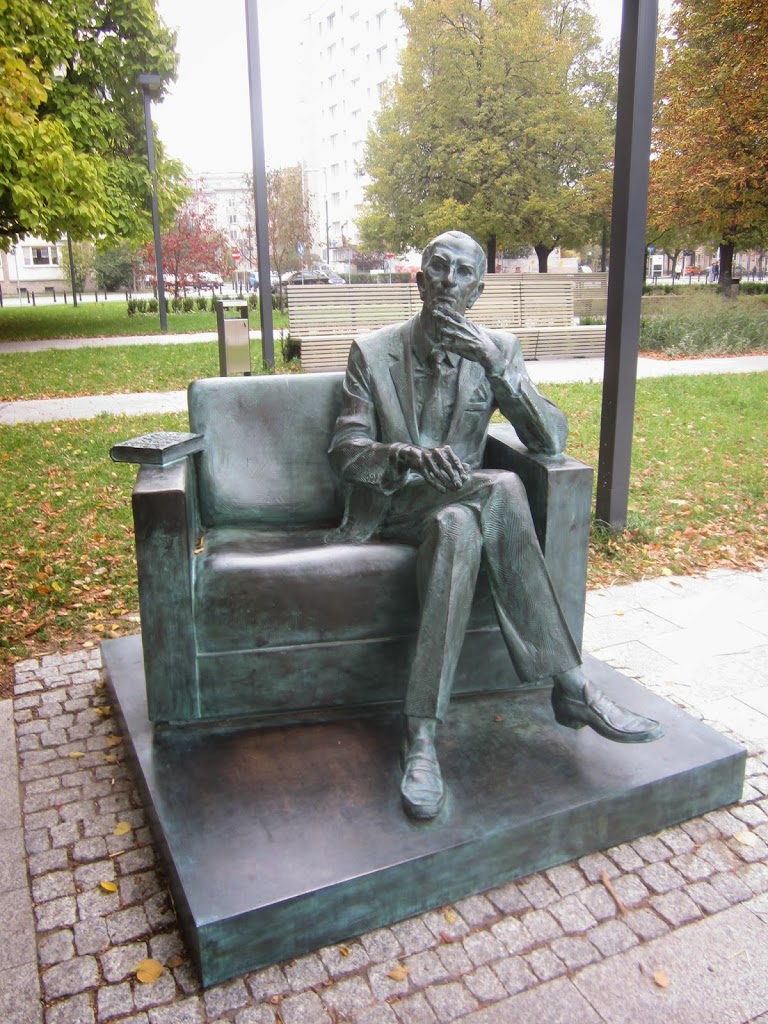 In 1942 he was recruited for propaganda work. By now the Warsaw Ghetto was being liquidated for Treblinka. Before he left on a diplomatic mission he secretly entered the Warsaw Ghetto twice to see the deplorable conditions there. Those conditions haunted him the rest of his life. His official mission was to report on the Underground to the Polish government; his passion was to specifically draw attention to the plight of the Warsaw Jews. During a private meeting with Franklin Roosevelt in July 1943, he informed the president that millions of Jews had already been murdered, mass extermination was at a level never seen before, and the Jewish nation needed Allied intervention.

His secrecy as a courier gone, he remained in the United States and in 1944 dictated his book to improve the image of Poland and to gain American support against Soviet power. After the war he studied at Georgetown University attaining his Ph.D in 1952, and then taught at Georgetown for 40 years.  Bill Clinton attended one of his classes in 1968. He never wanted to return to Poland as long as it was under communist rule. 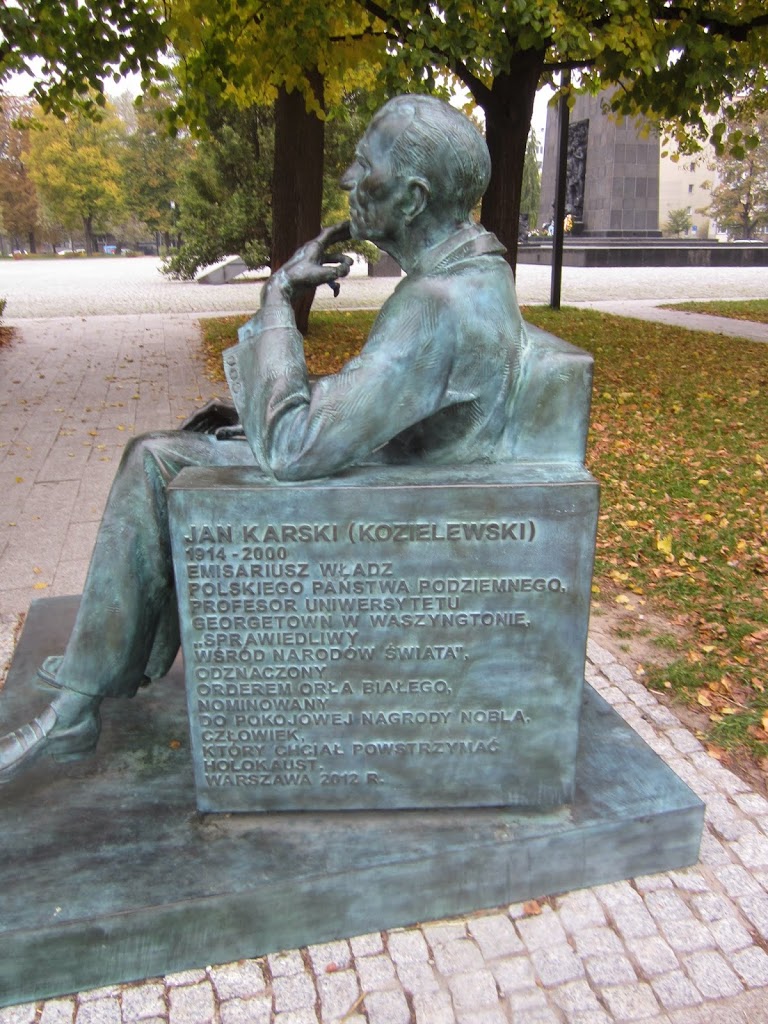 Shoah, an 8-hour documentary on the Holocaust that interviews almost solely Jewish survivors included a segment on Jan Karski.  I watched this segment and could see perfectly how this well-spoken, suave, impeccably dressed, intelligent person would be an excellent emissary for Poland.

In 1982 Yad Vashem  recognized Karski as Righteous Among the Nations for his efforts to convey the murdering of Polish Jews. Several universities awarded him honorary doctorates, and in 1994 he was made an honorary citizen of Israel. In 2012 President Barack Obama posthumously awarded Karski the Presidential Medal of Freedom, our nation’s highest honor. The Jan Karski  Educational Foundation began in 2011 with the stated mission:  The mission of the Jan Karski  Educational Foundation is to instill in people – especially youth – the values of leadership, courage and integrity, as exemplified by the life of Jan Karski. 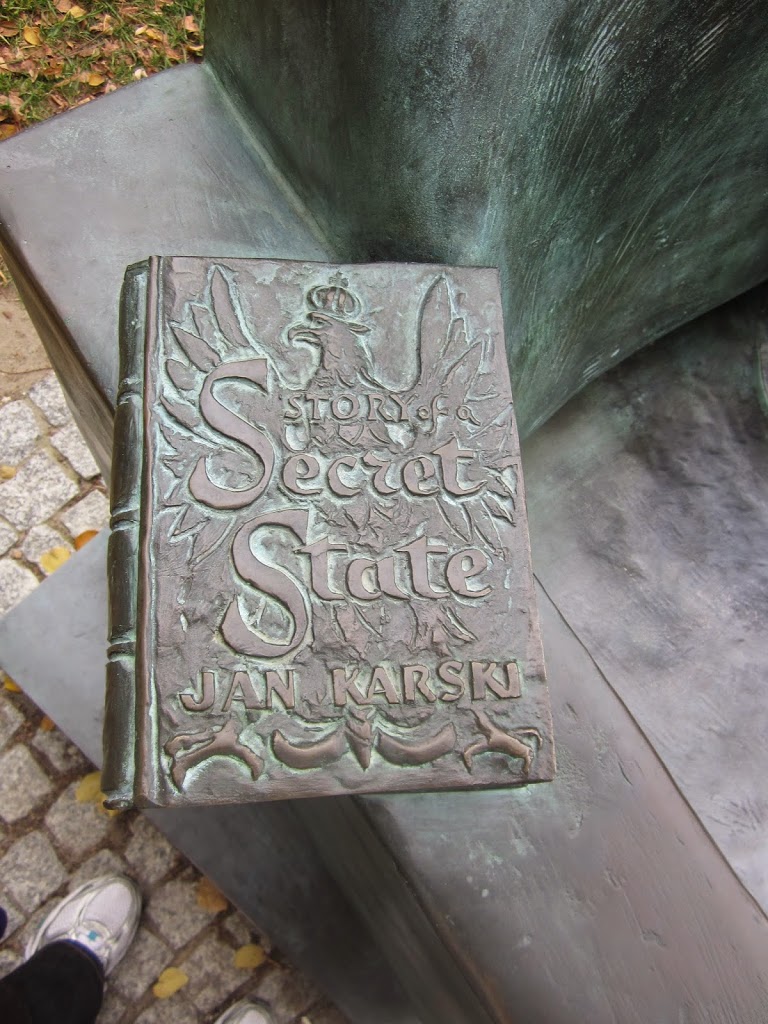 Headshot of Karski featured on both Yad Vashem and jankarski.net. Photos of statue to Jan Karski were taken in Warsaw in October 2013, not far from the new Museum of the History of Polish Jews.

” Never in the history of mankind, never anywhere in the realm of human relations did anything occur to compare with what was inflicted on the Jewish population of Poland.” Jan Karski, 1944