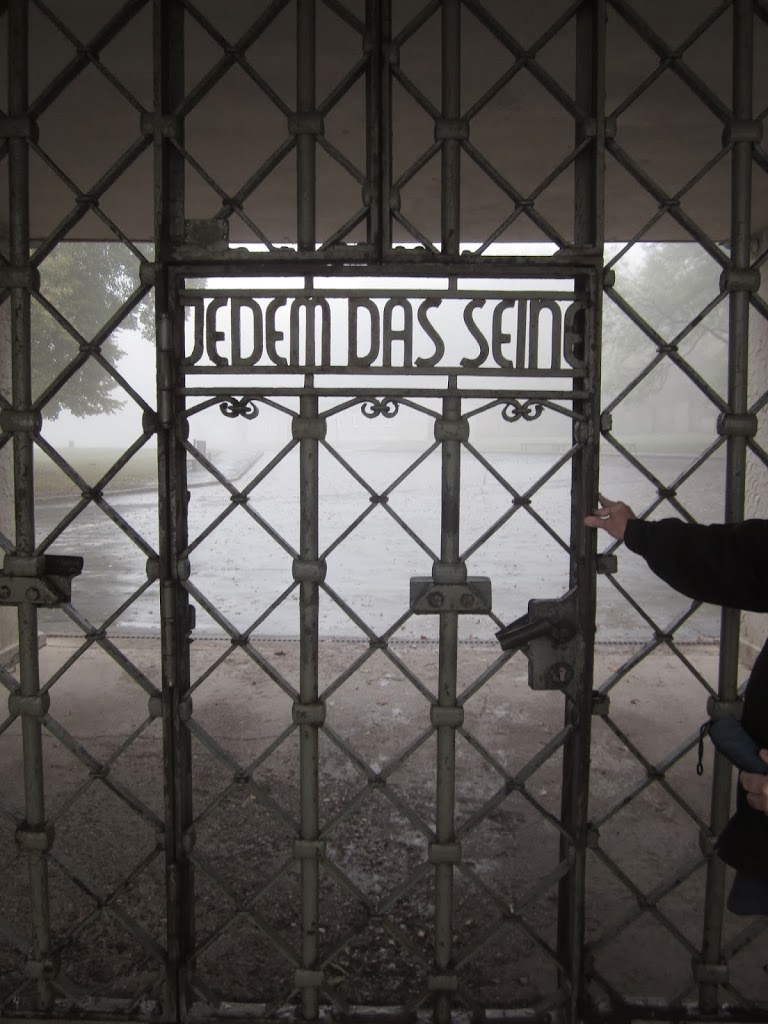 As we entered through the Buchenwald gates we passed by the sign “Jedem Das Seine” – or everyone gets what they deserve. In Auschwitz you marched under the sign; here it was eye level to make sure you see it.  I like this saying better than Arbeight Macht Frei.
There was a barrel of this black disinfectant that stunk like hell. The barrel was about the size of a barrel of wine. Three hundred of us, and everyone has to go in the barrel and dunk in. The black powder was there to get rid of lice and typhoid. (Note – Henry said powder – I’m not sure if it was powder or liquid.) They knew that there was a lot of disease and typhoid in Auschwitz and the Germans were scared like hell of the disease coming to Buchenwald. After the barrel you take a shower right away, put on your old clothes and they send you to quarantine. I became Buchenwald Prisoner number 10948.
We were experienced, so we knew how this worked. That is why Kazio had the leather shop make me that belt. When I go to dunk in the barrel we take everything off and dunk, while we hold our belts above our head. That was how I was able to keep what Kazio sent with me.
At the end of the camp there was an area surrounded by barbed wire, and they put about 1000 people there for two weeks of quarantine. If somebody got sick we would have to stay longer, but no one got sick. I think we stayed there about a week or two.
So we’re trying to figure out what to do. They gave us food and we started walking around trying to learn about this camp.  After work, the older prisoners, the Poles came to check us out, and then stood there and spoke to us through the wire fence.
“Ah, so you’re from Auschwitz. You’re from Auschwitz, you’re from there.” (968 Poles arrived from Majdanek-Lublin on April 3, 1943.) They talked  about families. Many had been there a very long time. There were plenty of German red winkels (triangles – red means political) and red winkels, from plenty of nationalities, Polish, Czech, Holland, Russkie (slang for Russian) and so forth. – Henry Zguda
Note – Henry never mentioned his arrival at Buchenwald other than going through the gates, and I knew hardly anything about Buchenwald when we first met. However in March 1943 when Henry arrived there, the railway only went as far as the town of Weimar.  From 1937 until 1943 there was only a road from Weimar to Buchenwald.  New arrivals were forced to run the 8 kilometers up hill, chased by barking dogs and the SS. The road was initially paved by prisoners with stones from the quarry near Buchenwald. Today the road is known as Blutstrasse, or Blood Road, both for the number of prisoners who died building the road, and for the brutal trip up the hill. It is the same, and only road to the camp. The city bus we rode to the camp takes the same winding road through a thick, beautiful forest. It would be a very looooong run uphill.

In March of 1943 Himmler ordered a railway built to Buchenwald for the sole purpose of transporting arms from the munitions factory at Buchenwald.  The railway opened in June 1943; passengers were not permitted until the spring of 1944, when deportees began to arrive en masse.

Photo taken October 2013 at Buchenwald.  The arm to the right is mine holding the gate in place for the photo. Otherwise it swung open.