During Poland’s 21-year ‘inter-war’ period, there were many active sports clubs and sports.  According to the museum housed in Oskar Schindler’s factory the two leading sports clubs were Cracovia Sports Klub and the Krakowski Klub Sportowy Cracovia, established in 1906. And while the Krakow YMCA housed the only indoor pool in town, there were two other pools in Krakow including an outdoor facility at Park Krakowski. 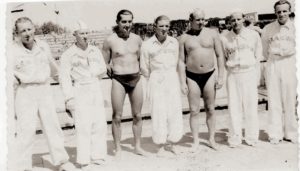 Cracowia was a powerful sport club with a champion soccer (football in Europe) playing club. They were the champion Polish soccer club. They had every big sport: basketball, volleyball, swimming.  I joined Cracowia later after the YMCA.
You know we also played a championship against the Maccabi club.  That was the Jewish club.  Maccabi is a name out of the Bible.  We were always fighting for first place with them.  In the Maccabi club they had a powerful goal keeper, Stanley Rose. There were also the Ritterman brothers, I want to say Jules and Mike, or something similar.  I also remember the Soldinger brothers.
During one of our interviews, Henry started reminiscing about his swimming and his start in tennis
You know, swimming makes you dumb.
What do you mean it makes you dumb??
Think about it.  Imagine playing water polo.  First you warm up with an hour of swimming.  Then you practice passing the ball for one hour.  THEN you play an hour-long game against your opponent.  So what does the coach make you do afterwards?  To relax and wind down, you swim another 800 meters.  So what do you think of?  You think of nothing.  You just swim. Do you understand? You do this every day, and finally you are dumb – you just push through do without thinking.   – Henry Zguda
Note – When I was in Krakow we passed a huge sports club or gym with the words ‘Cracowia’ painted on the side.  Our interpreter was surprised I recognized the name. The photo is from Henry’s scrapbook and is undated, but it may be from after the war as I think I recognize his friend Leon Kraska. I’m not sure. Because he’s not in the Cracowia uniform I suspect he and his friend are winners from the opposing team – but I don’t really know.  The point is the Cracowia team has a long history in Krakow even to today. (Henry Zguda is the third from the left.)
Surprisingly, there are many sports teams today that carry the name Maccabi, and I even located a web site for Maccabi USA, ‘Building Jewish Pride Through Sports.’  Under the history tab there is even a mention under 1932: “Poland does well in football (soccer), water polo and boxing.”

1 thought on “Other Sports Clubs in Krakow”